NEW YORK, March 1, 2021 /PRNewswire/ --Â The Shubert Organization is moving forward with a major restoration and expansion project at the Cort Theatre. In addition to historic refurbishments to the interior and rehabilitation of the NYC historic landmark's faÃ§ade, the venue will be getting a much-needed 35-foot-wide expansion on its western side. 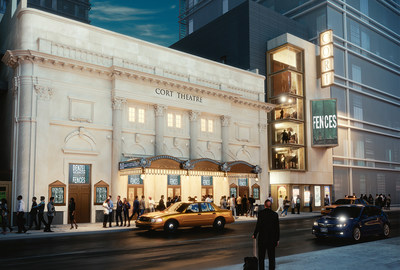 Unlike the historic main theatre, built in 1912 by architect Thomas Lamb, the new annex by Kostow Greenwood Architects will have a thoroughly modern design. Plans include the addition of new lounges and concession spaces for theatregoers on multiple levels, an available elevator, additional restroom facilities with accessibility in mind, and better traffic flow for patrons. Theatre staff and performers will benefit from new dressing rooms, wardrobe facilities, and rehearsal space.

Designs for improvements to the historic 1912 structure are by architect Francesca Russo, who has worked on nearly all of Shubert's restoration projects for the past 25 years. Enhanced theatre functionality will allow for the presentation of more modern, technically demanding productions with larger casts; major improvements to the stagehouse include expanded wing space and modernized rigging. There will be no additional capacity added to the auditorium of the intimate landmarked theatre, but the new theatre seating will enhance comfort and accessibility for the audience.Â

The Cort plans represent Shubert's first major theatre expansion project in decades. The addition of the annex structure at the Cort allows for a more ambitious renovation project and a chance to truly modernize one of Broadway's historic theatres.

Built by and named for John Cort, manager of a Seattle theatre circuit with playhouses scattered throughout the western US and British Columbia, the Cort Theatre was acquired by the Shubert brothers in 1927. It is the only surviving theatre on Broadway designed by Thomas Lamb. Its classic exterior was inspired by the Petit Trianon at Versailles, and architecture from the period of Louis XVI inspired the interior. Restoration of the original proscenium arch, featuring back-lit art glass set in ornamental plaster lattice, will be a particularly spectacular feature in bringing back the original dÃ©cor.

The Shubert Organization is America's oldest professional theatre company and the largest theatre owner on Broadway. Since the dawn of the 20th century, Shubert has operated hundreds of theatres and produced hundreds of plays and musicals both in New York City and throughout the United States. Shubert currently owns and operates 17 Broadway theatres, six off-Broadway venues, and the Forrest Theatre in Philadelphia. Under the leadership of Robert E. Wankel, Chairman and CEO, The Shubert Organization continues to be a leader in the theatre industry. Shubert delivers innovative ticketing solutions via its Telecharge interface, API distribution, and private-label technology, offering unparalleled distribution and marketing to the theatre industry and beyond. Its consumer-facing brandsâTelecharge for retail ticket sales and Broadway Inbound for group buyers, tour operators, and the travel industryâsell millions of tickets each year. The Shubert Foundation, sole shareholder of The Shubert Organization, Inc., is dedicated to sustaining and advancing live performing arts in the United States. The Foundation provides general operating support to not-for-profit theatres and dance companies. Foundation grants in 2019 totaled $32 million.