JACKSONVILLE, Fla., June 18, 2021 /PRNewswire/ --Â On June 20th, Sheldon Davis, aka rapper Natalac, will release his 12th album, "Love & Pimp-Hop." This album was scheduled for a 2021 Valentine's Day release after Natalac mom's cancer condition improved. It was a year-long battle with cancer, but her condition finally improved in February. NatalacÂ and his dad thought they could take a rest, but almost immediately after she improved, his father was diagnosed with stage 4 cancer on Valentine's Day weekend, so Natalac refused to release it. NatalacÂ and his dad went from taking care of his mom to his momÂ and Natalac taking careÂ of hisÂ dad ...Â talk about a whirlwind. 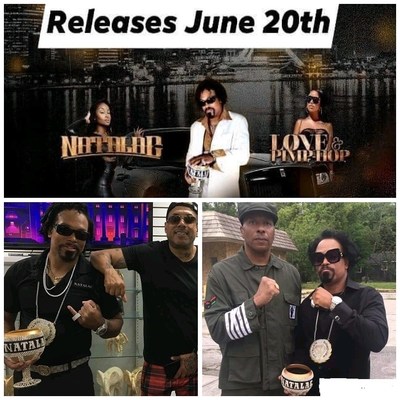 Rapper Natalac releases projects 2 or 3 years apart, so this time Natalac chose to release on his dad's birthday, which is Father's Day, June 20th. Natalac says, "Most of the features on 'Love & Pimp-Hop' have all been supportive of my situation, but Benzino & Mikhail Muhammad really took it to another level with their callsÂ and prayers. I wouldn't want any artist to get too involved in my stress, cause it might destroy their creative process. But the calls and prayers helped a lot. Truthfully, the idea for 'Love & Pimp-Hop' came from my time touring with Benzino, one of Love & Hip Hop: Atlanta'sÂ most iconic cast members."

BenzinoÂ and Natalac's "Run Tell That" started a friendship, so Benzino invited Natalac to his tour of 15 dates across 14 states. Natalac says, I'm always grateful for that. I drove 1 of my 18-wheelers from Natalac Express and booked loads of freight to every Benzino show. Nat's dad says, "it ain't work unless i see elbows and a*******, but Natalac works his butt off." Natalac normally multitasks his truckloadsÂ and rap shows on his own, so performing with Benzino was easy.