CINCINNATI, April 21, 2021 /PRNewswire/ -- Innovation, data-driven journalism and determination to keep a nation and a world informed characterize the 2020 recipients of the prestigious Scripps Howard Awards. 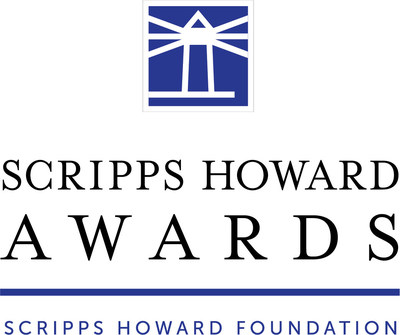 The Scripps Howard Foundation is pleased to announce winners of its 68th awards, which honor the best in American journalism from the previous year.Â A panel of veteran journalists and media industry leaders selected the final list of winners in this year's competition from nearly 900 entries.

"The historic events of 2020 shined a light on the importance of a free and independent press to American democracy," said Liz Carter, president and CEO of the Scripps Howard Foundation. "The journalism we honor with this year's Scripps Howard Awards broke down complicated issues through top-notch reporting and exceptional storytelling, providing the clarity we needed to better understand the world around us. The Scripps Howard Foundation is honored to recognize some of the many journalists across the country who rose to the occasion and excelled in their roles as defenders of truth at a time when facts themselves have been under unprecedented assault."

During a virtual awards show livestream on Facebook and YouTube, the Scripps Howard Foundation presented $160,000 in prize money to the winning organizations and journalists, including the winner of the coveted Impact Award. The Impact Award winner is deemed to have had the greatest impact from the list of 2020 winners.

The New York Times Visual Investigations Team was selected as this year's Impact Award winner for the broad impact its work had on the national consciousness and conversation about systemic racism. The team's investigative work led to police reforms, influenced court cases and enhanced public understanding of the incidents that prompted outrage and demonstrations across the United States.

The awards show will be rebroadcast May 8-9 onÂ NewsyÂ and on Scripps television stations throughout the summer.

Excellence in Coverage of Breaking News: Star Tribune (Minneapolis) for "The Killing of George Floyd" â Coverage of a local news story that quickly became the global epicenter for America's long struggle with racial inequality and injustice.

Judges' comments: "The Star Tribune team delivered a vivid, timely and fair account of the events leading up to and following the death of George Floyd at the hands of Minneapolis police officers. Their reporting incorporated critical perspective of the rash of African Americans dying in police custody and sorted out potentially misleading information in a difficult and explosive situation for the community."

Judges' comments: "KING-TV's long-term dedication to exploring race goes beyond Black and white to include the rich cultural fabric that is Seattle. The longform format gives the journalism time to breathe and avoids overly simple solutions."

Judges' comments: "If you look at the best investigative reporting, the thing that is persuasive is that it just piles fact upon fact upon fact until you can no longer refute, until you have to accept it. This series did that."

Excellence in Business/Financial Reporting: The New York Times for "The President's Taxes" â Reporting on former President Trump's tax returns that published well ahead of the 2020 presidential election, giving the public some insights into his financial dealings before going to the polls.

Judges' comments: "Americans were able to learn, ahead of the election, how a very wealthy, seemingly successful icon of American business could receive a tax bill for $750."

Judges' comments: "This compelling reporting shakes complacency and kindles a sense of urgency about the need for preparedness and mitigation before it's too late."

Distinguished Service to the First Amendment, honoring Edward Willis Scripps: NPR for "Civil War at the Voice of America" âÂ A series of investigative reports that uncovered the extent to which Trump appointee Michael Pack and the Trump administration were willing to politicize an institution created to be an independent champion of free speech and a beacon of American pluralism to the rest of the world.

Judges' comments: "Stephanie McCrummen's stories not only tell readers what the principal characters are saying but also the unspoken things they're thinking. Her exceptional character development, coupled with attention to telling details, makes for storytelling that is remarkable and memorable."

Excellence in Innovation, honoring Roy W. Howard: The Washington Post for "Flatten the Curve" âÂ A visual explainer that explored how viruses such as COVID-19 spread exponentially and how that spread can be mitigated, and even stopped, if social distancing protocols are diligently observed.

Judges' comments: "To date there is no better explanation of transmission. This was a game changer. Its simplicity and focus on the reader are what made it innovative."

Excellence in Local/Regional Investigative Reporting: Tampa Bay Times (St. Petersburg, Florida) for "Targeted" â An investigative series that exposed how an anti-crime program in Pasco County, Florida, institutionalized abusive policing practices that routinely violated residents' civil rights and invaded their privacy, even when they had done nothing wrong.

Judges' comments:Â "The depth in the reporting, personal accounts of those targeted and the use of body camera video took the storytelling to the next level and made it harder for skeptics to deny the abuse of power by the sheriff."

Excellence in National/International Investigative Reporting, the Ursula and Gilbert Farfel Prize: FRONTLINE PBS for "COVID's Hidden Toll"Â â A film that captured how the absence of mandatory COVID-19 workplace protections put essential agricultural workers at risk as they labored uninterrupted to make food available for a nation locked down.

Judges' comments:Â "The deep access and expertise of the FRONTLINE journalists, built on years of covering abuses of farmworkers, helped create rich, emotional storytelling that rings all too true."

Excellence in Multimedia Journalism: The New York Times for "Visual Investigations: Police Misconduct and Racial Injustice in 2020" Â­Â­â A series of visual investigations that used innovative video forensic analysis and meticulous investigative techniques to provide a thorough understanding of the events leading up to and resulting in the deaths of George Floyd, Breonna Taylor, Ahmaud Arbery and others.

Judges' comments:Â "Rarely has deadly police misconduct been so graphically revealed as in the 2020 work of The New York Times Visual Investigations team, which directly contradicted official accounts and revealed crucial details that helped trigger a national reckoning with a problem as old as the nation itself."

Excellence in Opinion Writing:Â Derrick Z. Jackson for "Tried to Warn You" Â­Â­â In his blog commentary for the Union of Concerned Scientists and Grist.org, Jackson drew stark attention to the dilatory effects caused by the politicization of COVID-19, calling out national leaders for ignoring the virus' impact on essential workers who are often, in large numbers, people of color.

Judges' comments:Â "Derrick Jackson writes with the aplomb of one heavily armed intellectually and the vigor of a man determined to use his voice to right wrongs. His research and sourcing provide credibility, and his eloquent writing makes his work moving and memorable."

Excellence in Radio/Podcast Coverage, honoring Jack R. Howard: Invisible Institute, The Intercept and Topic Studios forÂ "Somebody" â A seven-part investigative documentary podcast that searches for answers as to how 20-year-old Courtney Copeland ended up outside a Chicago police station with a fatal gunshot wound to his back.

Judges' comments:Â "'Somebody' is an innovative collaboration, and the decision to let Shapearl Wells, Copeland's mother, tell her own story was courageous and unique among the entries we received."

Judges' comments:Â "These were strong, compelling images. Photographers' use of composition, different angles, use of light and the intensely intimate moments that captured the emotion and drama close up."

The Scripps Howard Foundation, in partnership with the Association for Education in Journalism and Mass Communication (AEJMC), also announced winners for its two journalism education awards:

For more information and to watch a replay of the show, visitÂ shawards.org. Follow the conversation on social media using #ScrippsHowardAwards.

About the Scripps Howard FoundationTheÂ Scripps Howard FoundationÂ supports philanthropic causes important to The E.W. Scripps Company (NASDAQ: SSP) and the communities it serves, with a special emphasis on journalism education, excellence in journalism and childhood literacy. At the crossroads of the classroom and the newsroom, the Foundation is a leader in supporting journalism education, scholarships, internships, minority recruitment and development and First Amendment causes. The Scripps Howard Awards stand as one of the industry's top honors for outstanding journalism and the Foundation's annual "If You Give a Child a Book â¦" childhood literacy campaign has distributed more than 352,000Â new books to children in need across the nation since 2017. In support of its mission to create a better-informed world, the Foundation also partners with Scripps brands to create awareness of local issues and support impactful organizations to drive solutions that help build thriving communities.

About The E. W. Scripps CompanyThe E.W. Scripps CompanyÂ (NASDAQ: SSP) is a diversified media company focused on creating a better-informed world. As the nation's fourth-largest local TV broadcaster, Scripps serves communities with quality, objective local journalism and operates a portfolio of 61 stations in 41 markets. The Scripps Networks reach nearly every American through the national news outlets Court TV and Newsy and popular entertainment brands ION, Bounce, Grit, Laff and Court TV Mystery. Scripps is the nation's largest holder of broadcast spectrum. Scripps runs an award-winning investigative reporting newsroom in Washington, D.C., and is the longtime steward of the Scripps National Spelling Bee. Founded in 1878, Scripps has held for decades to the motto, "Give light and the people will find their own way."