RosettaBooks Publishes Nothing is Too Big to Fail by Kerry Killinger, former CEO of Washington Mutual Bank

NEW YORK, March 22, 2021 /PRNewswire/ -- RosettaBooks announced today the publication of Nothing is Too Big to Fail: How the Last Financial Crisis Informs Today, written by former CEO of Washington Mutual Bank, Kerry Killinger, and the former vice chair of the Federal Home Loan Bank of Des Moines, Linda Killinger. The authors take us behind the scenes of the 2008 financial crisis to learn what actions led to one of the worst recessions in history, and how, without focused action from the US federal government and the Federal Reserve, we may be on track to repeat these same mistakes. The book is scheduled for release on March 23, 2021. 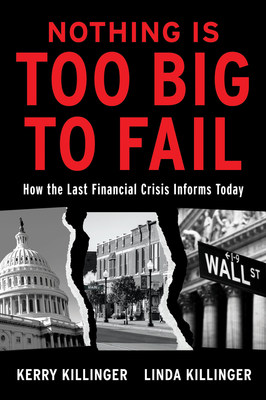 In 2008, the US economy collapsed, taking with it millions of jobs, homes, and life savings. Government actions before and after the crisis have led to inequitable distribution of wealth, which is destroying the middle class, reducing trust in government, and accelerating racial injustice. All the while, our country's fiscal and monetary policies have created asset and debt bubbles that could burst at any time.

In the last year, extraordinary actions by the Federal Reserve and the US government prevented COVD-19 from spurring on a new financial crisis. Unprecedented US federal budget deficits and expansive Fed policies have been effective short-term medications to fight the virus.Â But their long-term use can lead to addiction with severe side effects.

This book offers lessons learned from past crises and recommended actions for business and government leaders to take today to return our economic system and our democracy to a safer trajectory. The authors use their unique insight and perspective to warn us that no institution, government or country is too big to fail.

Nothing is Too Big to FailÂ is available in hardcover, ebook, and audiobook wherever books are sold. All net proceeds from the book will go to charity.

About the Authors: Kerry Killinger was the chairman, president and CEO of Washington Mutual Bank, the sixth largest depository bank in the country prior to the financial crisis of 2008.Â He graduated with a BBA with honors and an MBA from the University of Iowa.Â He is a chartered financial analyst (CFA) and a fellow in the Life Management Institute.Â He was chair of the National Education summit of Achieve and American Banker's Banker of the year, received President George H.W. Bush's Points of Light Award for his philanthropy, was vice chair and chair-elect of the Financial Services Roundtable, vice chair and chair-elect of the Federal Reserve's Thrift Industry Advisory Council, and was vice chair of the Federal Home Loan Bank of Seattle.Â He was elected to the American Society of Corporate Executives.Â He is currently the CEO of Crescent Capital.

Linda Killinger was vice chair of the Federal Home Loan Bank of Des Moines and chair of its audit/finance committee.Â She was also a consulting partner in an international accounting firm specializing in strategic planning and merger/acquisitions for financial institutions. She was the publisher and editor of Overseas Business magazine.Â Prior to that she was appointed by Governor Robert D. Ray as the director of administration for the Iowa Department of Human Services, which included the prison system, mental health hospitals, AFDC and other human service programs.Â She was appointed by Governor Tom Vilsack to chair his Committee for a Comprehensive Housing Strategy for Iowa.Â She has a bachelor of science degree from Iowa State University, an MBA from Drake University, and completed additional graduate work at the Kellogg Graduate School of Management. She currently is the CEO of Olympic Consulting.

In 2002, Linda and Kerry founded the Kerry and Linda Killinger Foundation which has the mission of public policy reform and social and racial justice, building community and access to the arts.

About RosettaBooks: RosettaBooks is a leading independent publisher headquartered in New York City. Launched in 2001, it pioneered by building an 800-eBook catalog of iconic titles. For the past five years, RosettaBooks' trade program has focused on high profile thought leadership titles including Leadership in a Time of CrisisÂ compiled by Marshall Goldsmith and Scott Osman, Digital TransformationÂ by Thomas M. Siebel, A Crisis WastedÂ by Reed Hundt, JourneysÂ compiled by Andrew Tisch and Mary Skifadis, The Promise and the DreamÂ by David Margolick, and The Wright StuffÂ by Bob Wright and Diane Mermigas. For more information, visitÂ RosettaBooks.com.