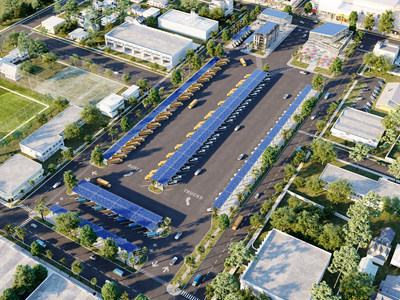 The V2G hubs and associated TaaS offering will initially focus on fleets such as last-mile delivery, ride hailing and ride sharing, municipal services, and student transportation.â¯The first application is expected to serve electric school buses based on existing commercial deployments and agreements between Nuvve and its V2G ecosystem partners to help achieve the objectives of President Biden's infrastructure plan, including its commitment to electrifying America's diesel school buses. Nuvve's TaaS offering will allow organizations to electrify their transportation by paying a monthly fee that covers leasing EVs, charging infrastructure, energy costs, vehicle storage, and vehicle maintenance.

The V2G hubs also resolve limitations with utilities related to multiple interconnections to the electric grid by small energy storage systems, such as V2G EVs. By creating a set of hubs within a geographic area with large connections to the grid - of the order of two to 50 megawatts - Nuvve will enable access to energy for its customers while delivering services to energy markets in a more efficient manner thanks to their virtual power plant and grid experience.

"Electrifying fleets is critical to achieving our nation's net-zero energy goals as the sector accounts for 20 percent of all transportation GHG emissions while comprising less than 10 percent of vehicles on the road," said Gregory Poilasne, chairman and CEO of Nuvve. "Many fleet owners want to electrify, but high upfront cost and concerns about charging infrastructure are slowing down adoption. Our global V2G hubs and TaaS model is a strategic way of resolving both of those challenges while maximizing the value of these vehicles by better harnessing renewable energy and reducing load on the grid."

"Our vision is to have an initial deployment near our headquarters in Southern California," Poilasne added.Â Fleet owners interested in V2G hubs can visit nuvve.com/hubs to learn more.

About Nuvve Holding Corp.:Â Nuvve (NASDAQ: NVVE) is accelerating the electrification of transportation through its proprietary vehicle-to-grid (V2G) technology. Its mission is to lower the cost of electric vehicle ownership while supporting the integration of renewable energy sources, including solar and wind. Nuvve's Grid Integrated Vehicle, GIVeâ ¢, platform is refueling the next generation of electric vehicle fleets through intelligent, bidirectional charging solutions. Since its founding in 2010, Nuvve has launched successful V2G projects on five continents and is deploying commercial services worldwide by developing partnerships with utilities, automakers, and electric vehicle fleets. Nuvve is headquartered in San Diego, California, and can be found online atÂ www.nuvve.com.

The information in this press release includes "forward-looking statements" within the meaning of Section 27A of the Securities Act of 1933, as amended, and Section 21E of the Securities Exchange Act of 1934, as amended. All statements, other than statements of present or historical fact, regarding the Nuvve's strategy, future operations, estimated and projected financial performance, prospects, plans and objectives are forward-looking statements. When used in this press release, the words "could," "should," "will," "may," "believe," "anticipate," "intend," "estimate," "expect," "project," the negative of such terms and other similar expressions are intended to identify forward-looking statements, although not all forward-looking statements contain such identifying words. These forward-looking statements are based on management's current expectations and assumptions about future events and are based on currently available information as to the outcome and timing of future events. Except as otherwise required by applicable law, Nuvve disclaims any duty to update any forward-looking statements, all of which are expressly qualified by the statements in this section, to reflect events or circumstances after the date of this press release. Nuvve cautions you that these forward-looking statements are subject to numerous risks and uncertainties, most of which are difficult to predict and many of which are beyond the control of Nuvve, including the following factors: (i) Nuvve's ability to realize the anticipated benefits of its recent business combination; (ii) risks related to the rollout of Nuvve's business and the timing of expected business milestones; (iii) Nuvve's dependence on widespread acceptance and adoption of electric vehicles and increased installation of charging stations; (iv) Nuvve's ability to maintain effective internal controls over financial reporting, including the remediation of identified material weaknesses in internal control over financial reporting relating to segregation of duties with respect to, and access controls to, its financial record keeping system, and Nuvve's accounting staffing levels; (v) Nuvve's current dependence on sales of charging stations for most of its revenues; (vi) overall demand for electric vehicle charging and the potential for reduced demand if governmental rebates, tax credits and other financial incentives are reduced, modified or eliminated or governmental mandates to increase the use of electric vehicles or decrease the use of vehicles powered by fossil fuels, either directly or indirectly through mandated limits on carbon emissions, are reduced, modified or eliminated; (vii) potential adverse effects on Nuvve's revenue and gross margins if customers increasingly claim clean energy credits and, as a result, they are no longer available to be claimed by Nuvve; (viii) the effects of competition on Nuvve's future business; (ix) risks related to Nuvve's dependence on its intellectual property and the risk that Nuvve's technology could have undetected defects or errors; (x) changes in applicable laws or regulations; (xi) the COVID-19 pandemic and its effect directly on Nuvve and the economy generally; (xii) risks relating toÂ privacy and data protection laws, privacy or data breaches, or the loss of data; and (xiii) the possibility that Nuvve may be adversely affected by other economic, business, and/or competitive factors. Should one or more of the risks or uncertainties described in this press release materialize or should underlying assumptions prove incorrect, actual results and plans could differ materially from those expressed in any forward-looking statements. Additional information concerning these and other factors that may impact the operations and projections discussed herein can be found in the proxy statement/prospectus filed by Nuvve with the SEC and in the other reports that Nuvve will file from time to time with the SEC. Nuvve's SEC filings are available publicly on the SEC's website atÂ www.sec.gov.