WASHINGTON, Oct. 12, 2021 /PRNewswire/ --Â With neurodegenerative diseases affecting millions of individuals in the United States, now is an important time to spotlight the increasing impact these diseases have on our country's aging population and their families.

Neurodegenerative diseases occur when nervous system cells (neurons) in the brain, spinal cord and/or peripheral nervous system begin to deteriorate or become functionally impaired. As neurons deteriorate, people may first experience relatively mild symptoms, such as coordination issues or problems remembering names, but as more neurons are affected, symptoms progress and eventually some patients lose the ability to walk or function independently. Alzheimer's disease, multiple sclerosis and Parkinson's disease are the most common neurodegenerative diseases.

The 261 medicines in development include: 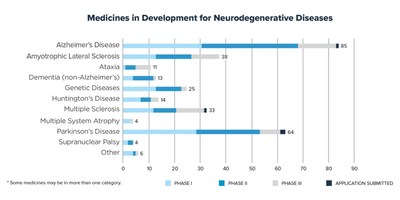 For decades, biopharmaceutical companies have focused on finding new treatments and cures for these diseases and hope is on the horizon as scientists continue to uncover how the central nervous system works at the molecular and genetic levels. Additionally, advancements in science and technology now allow the biopharmaceutical industry to leverage digital technology tools in R&D to improve drug development and speed access to medicines. Digital R&D is rapidly evolving with the potential to reduce barriers to innovation for novel medical products and therapeutics. Additionally, artificial intelligence/machine learning (AI/ML) platforms have been used to research neurodegenerative diseases and shown promise in early diagnosis, predicting the likely course of disease and aiding in the development of new therapies.

There has been tremendous progress in scientific and medical innovations for neurodegenerative diseases over the past decade, but continued efforts are needed to ensure America's aging population is protected against potential life-altering threats. PhRMA and our member companies are dedicated to finding new ways to help those affected by neurodegenerative diseases and enable innovation.