HONG KONG, June 25, 2021 /PRNewswire/ -- Many waterbird species which travel across hemispheres are affected by a wide range of environmental and anthropogenic factors. A first-of-its-kind study along the China coast, jointly conducted byÂ theÂ Science Unit of Lingnan University in Hong Kong (LU)Â and the Hong Kong Bird Watching Society (HKBWS), quantified the 20-year wintering population trends of 42 waterbirds species in the Deep Bay area to evaluate the impacts of different threats along the East Asian-Australasian flyway (EAAF), providing important baseline information and recommendations on conservation. 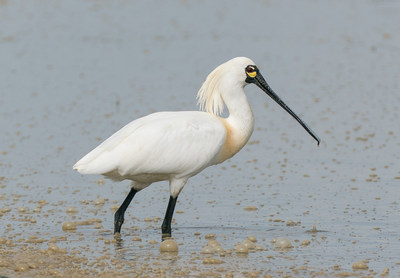 HKBWS has been conducting waterbird surveys in the Deep Bay area since the early 1980s, which, since 1998, have developed into a monthly monitoring programme through the support of the Hong Kong Government, that is Â now the longest systematic survey along the China coast.

Taking the dataset collected from 1998 to 2017, the Lingnan University and HKBWS research team identified species traits correlating with population trends to shed light on the threats they experience in their breeding and migratory grounds. Of the 42 wintering waterbird species analysed, there has been a significant increase in the population of nine species over this 20-year period, including black-faced spoonbill, black-winged stilt, Chinese pond heron, common greenshank, Eurasian curlew, great knot, little grebe, Pacific golden plover and pied avocet. Of these, the black-faced spoonbill is the only species with sufficient data elsewhere supporting a regional population increase due to international conservation efforts for almost three decades. However, it is still classified as "endangered" on the International Union for Conservation of Nature's Red List.

The research team noted that population trends of wintering waterbirds areÂ associated with breeding grounds and stopover sites. Species breeding in Southern Siberia have decreased more than those breeding in East Asia. And species that rely on the Yellow Sea have declined more than others, given that the tremendous ecological value of the tidal flats in the Yellow Sea area has declined by over 50 per cent in the last 50 years, mainly due to coastal reclamation. The research team also found that larger species, such as Dalmatian Pelican and ducks, decreased more than small species over this 20-year period, and this may be due to hunting.

Prof Sung Yik-hei, Assistant Professor of the Science Unit, said the study results demonstrate that urgent conservation actions are essential to reverse the negative impact of such rapid habitat loss and degradation. "Waterbird data analysis will help people understand why and how the waterbird population changes over the years. We found that attention should be paid to declining species, such as ducks and larger species that are susceptible to hunting, habitat loss and other environmental and anthropogenic factors. It is possible that the habitat degradation in other wintering sites has led to the redistribution of wintering populations, resulting in increasing trends for some species in Hong Kong."

Mr Yu Yat-tung, Director of the HKBWS, explained that wetlands at and around Mai Po support a high proportion of species exhibiting increasing trends when compared to other studies, indicating that current conservation practices may have a positive impact against the development of wetlands around the Deep Bay area. "We must continue to conduct long-term monitoring of waterbirds, safeguard and strengthen the existing conservation policy, and support further scientific research on biodiversity conservation in this important wetland of Hong Kong, so as to ensure the waterbirds' long-term survival and environmental sustainability in the East Asian region and along the EAAF," He said.

Details of this discovery has been published recently in the international academic journal Frontiers in Ecology and Evolution.