CHICAGO, March 30, 2021 /PRNewswire/ -- The American Lung Association's LUNG FORCE initiative is uniting the nation to take a stand against lung cancer and for lung health. Award-winning actress Laura Dern is kicking off the American Lung Association's 2021 LUNG FORCE Walk season by inviting the public to join a local community Walk or join her virtual Walk team to raise funds to defeat lung cancer. 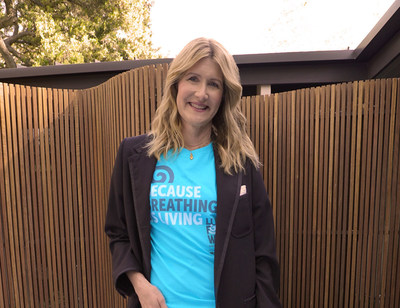 "When I was six, I lost my grandfather to lung cancer. And since then, I have lost others to this devastating disease. I want to ensure no one ever has to lose a loved one from lung cancer, and that's why I walk with the American Lung Association's LUNG FORCE," said Laura Dern. "Please join me, and sign up for the LUNG FORCE Walk, so that we can show our strength against lung cancer."

Participants may join a local community Walk or Laura Dern's LUNG FORCE Virtual Walk team by registering at LUNGFORCE.org/walks. Everyone is invited to make plans to walk for lung health, and as a virtual event, may choose their own distance and day to walk. All participants who raise $100 will receive a LUNG FORCE t-shirt, and those raising $150 or more will qualify for other incentives. The top 20 nationwide fundraisers will have the chance to meet Laura Dern at a virtual reception.

"Through our LUNG FORCE initiative, we are shining a spotlight on lung cancer as the #1 cancer killer and raising funds for lifesaving lung cancer research and program services," said American Lung Association President and CEO Harold Wimmer. "Thankfully we have seen an increase in survival rates largely due to new therapies advanced by research, and we must continue to fund promising research to save more lives. We are proud to stand alongside Laura Dern in support of all those facing lung cancer, and in an effort to ultimately defeat lung cancer."

To learn more about the American Lung Association's efforts to defeat lung cancer through research, advocacy and education, visit LUNGFORCE.org. Journalists seeking to request an interview with a lung cancer expert or researcher may contact Allison MacMunn at Media@Lung.org 312-801-7628.