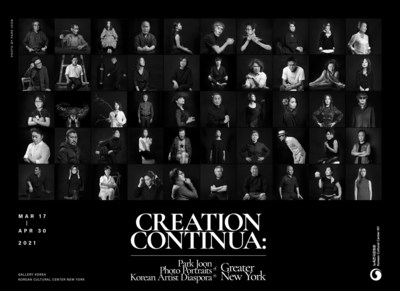 A special exhibition celebrating Asia Week New York 2021, CREATION CONTINUA chronologically displays photographs of 50 Korean immigrant artists who came to the United States in the latter 20th century and remain active in their artistic practice. The portraits' stark intimacy provides an opportunity to gain a deeper understanding of modern and contemporary Korean art history through the histories of Korean diaspora artists.

A special virtual exhibition opening event will be held on March 17th at 6 pm ET with a subsequent discussion hosted by the Korean Cultural Center New York. The online live event will feature photographer Park Joon in dialogue with the artists featured in the exhibition representing Korean American art history in a lively conversation.

National borders have lost much of their meaning in today's global society as the impetus to relocate across the world increases, and many artists live and work in places where they were not born. The meaning of diaspora artists has gradually expanded to include those who have moved to different countries voluntarily, and are creating artworks unbounded by geographic identities. When reflecting on the history and the works of Korean artists who moved to New York in the 1950s and 1960s, the meaning of their individual narratives becomes even more significant as a part of a greater canon.

A New York-based diaspora artist himself, Park Joon felt the need and desire to archive the stories and footprints of Korean artists in New York City, a pivotal center of the art world. He began the project to document each of their histories through his own lens. The project is distinct in that Park photographed the artists in their homes or studios in order to capture their most natural and authentic selves. Park also presents each artist against a portable backdrop to focus only on the figures. In a way, CREATION CONTINUA is a rare record of the artists' existence in another artist's work, distanced from their own works, and is noteworthy for both its acknowledgement and singularity in the establishment of Korean American art history.

Since its establishment in 1979, the Korean Cultural Center New York has served as an outpost for promoting Korean culture for more than 40 years and has grown together with Korean artists in New York. Through this exhibition, the Korean Cultural Center New York concludes a chapter of its history at 460 Park Avenue that it shared with these artists, and at the same time takes a special opportunity to launch a new vision and future before moving to its new home.

Park Joon, born March 1st, 1956 in Busan, South Korea, is a distinguished Korean American photographer.Â  He immigrated to the United States in 1984 and has since lived with his wife of 33 years, Young-hee Hwang, in Jamaica, New York.

His Korean American Artist Portrait Series explores themes of desertification and miracles in our contemporary lives. The diaspora forms parallels to the physical desert, a symbolic oasis. Intended to capture fellow immigrant artists who continuously create to justify their existence, unexpected details of the human physique contrast with authentic yet heightened gestures. He uses the same backdrop in each to strip the complex of separation encouraged by labels of rich vs poor, famous vs. less famous, old vs young.

Park Joon's images embody the healing power and regenerative cycles of nature. The Korean American Artist Portrait Series rejects preconceived notions of artistic identity, capturing candid images of his peers within the Korean artist diaspora in New York. He critically displays intrinsic humanity, bypassing superficial norms. Creation Continua means "the idea that the created world is dependent on the active presence of the creator," an apt message for our collective future and artists compelled to continue their own cycle and project hope for new norms in the times of Covid-19. (Text by Inhee Iris Moon)