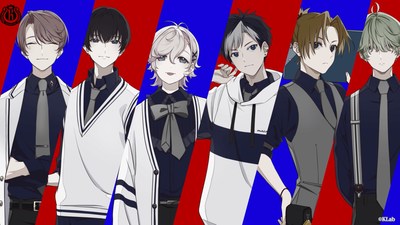 Only a week had passed when the "aoppella!?" J-Pop cover medley released on March 4 surpassed the 1 million view mark (currently 1.4 million views). Now fans of this new series can indulge in their first ever original music video on the official YouTube channel with their song "Think About U" performed by the Kanadezaka Private High School group FYA'M' (Fame).

"Think About U" is an R&B-style song with smooth voice percussion and bass rhythms. ListenersÂ can hear the characters as individual parts weaving together this sweet melody. Viewers will find themselves lost in this mysterious music video's worldÂ in black and red. This music video has a groovy, sexy style which is accentuated by the uniqueness of the members of FYA'M' (Fame).

Special messages from the characters will be posted over time on the official Twitter (@aoppella) starting on Saturday, March 20 to celebrate the release of the original song "Think About U". The characters will each talk about their memories creating the song.

"aoppella!?" is KLab's latest original multimedia music project built on the themes of "youth" and "a cappella"!