DEERFIELD, Fla., April 14, 2021 /PRNewswire/ --Â This Sunday, April 18th Joe Bonamassa hosts the ultimate livestream experience with his 2nd Annual Stream-A-Thon at 3Â pm ET. The colossal charity event will feature 3+ hours of music with over 35 incredible performances from a star-studded lineup including Bonamassa, Toto, Dion, Ana Popovic, Warren Haynes, Bobby Rush, Jared James Nichols, Emily Wolfe and many more. The Stream-A-Thon is sure to wow fans old and new, with such variety and talent in their lineup full of Joe's legendary friends along with a slew of new emerging acts, there's something for everyone! 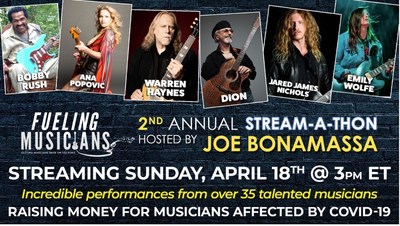 This spectacular display of musicianshipÂ is presented by Bonamassa's Keeping the Blues Alive Foundation and will raise money to support the music community through their Fueling Musicians Program. Supporting artists for over a year amid the pandemic, they've secured $417,000 in funding for qualifying touring musicians who are suffering financial hardship since their careers have been put on hold. The program provides immediate $1,500 cash payments for essential living expenses to help musicians stay afloat until they can get back out on the road. Many recipients were given their funding even before receiving aid from the government! Joe quips, "We give away the money as fast as we get it because people are in need and we have a little saying â 'It's the Bona-Stimulus.' With your support we can reach so many more artists that need financial assistance." To date, 250 musicians have been helped through Joe's Fueling Musicians Program.

Coming right off a critically acclaimed show at ACL Live on April 1st, where Bonamassa gave an exceptional Blues Rock Trio performance from "music's best address," alongside Late Night with David Letterman's Anton Fig on drums and legendary bass player Steve Mackey, to a socially distanced crowd and a global audience via livestream. This incredible concert is available to view on-demand until May 2nd. To watch the show visit: https://joeb.me/aclticket. Each ticket includes a donation to the KTBA Fueling Musicians program. Sonic Abuse raved, "Meticulously prepared, with a set list to die for and in a power trio format we see far too infrequently, 'Live At Austin City Limits' is another triumph for Joe Bonamassa."

In addition to the Stream-A-Thon event, KTBA Records will be releasing a special collaborative digital album put together by the legendary Jimmy Vivino to help continue the fundraising. The band was named The Blue Quarantinos and the album titled 'Phoning It In' because it was created during lockdown. It features 20 special guests including Dion, Joe Bonamassa, the North Mississippi All Stars, Shemekia Copeland and many more showcasing their talents over 12 amazing tracks. The Stream-A-Thon will premiere the video singles "Skinny Woman" and "I'm Yours and I'm Hers" to help promote the album's release. The digital album will be available starting this Sunday at KTBA.org and 100% of the proceeds will go to the Fueling Musicians Program. "Thank you to Jimmy and all the amazing artists that donated their talents and time for this great cause," exclaimed Bonamassa.

Be sure to look out for more exclusive merchandise for the event, including signature guitars signed by Emily Wolfe and Jared James Nichols, along with other new products on KTBA.org

Similar to past sailings, in addition to multiple performances from artists on the line-up, guests will enjoy an immersive blues vacation including unique collaborations and exclusive curated content filled with discussions, activities and more with details to be announced soon. The cruises have always been a major fundraising event for KTBA and will continue to be an important source of funding to benefit music education! While the 2022 Keeping The Blues Alive at Sea Caribbean voyage is currently sold out, fans are encouraged to join the waiting list at www.bluesaliveatsea.comÂ and also connect with Keeping the Blues Alive at Sea on Facebook, InstagramÂ and Twitter.

Individuals or organizations interested in helping Joe support the Keeping The Blues Alive Foundation and the Fueling Musicians program should go to the foundation's website ktba.orgÂ or http://joeb.me/FMPÂ

Artists who would like to be considered for financial aid from Fueling Musicians can fill out an application via http://joeb.me/FMPapplicationÂ

About Joe BonamassaAs a professional musician for over 30 years, Joe Bonamassa continues to blaze a remarkably versatile artistic trail, and amass an authentic, innovative and soulful body of work. Bonamassa's career began onstage opening for B.B. King in 1989 when he was only 12 years old. Today, he is hailed worldwide as one of the greatest guitar players of his generation and is an ever-evolving singer-songwriter with over 40 albums to date all under his own label, J&R Adventures.

About Keeping the Blues Alive FoundationKeeping the Blues AliveÂ® Foundation is a 501(c)(3) non-profit organization founded by two-time GRAMMY-nominated blues-rock artist Joe Bonamassa and his long-time manager Roy Weisman. KTBA fuels the passion for music by funding projects and scholarships to allow students and teachers the resources and tools that further music education. Since its inception in 2011, KTBA has funded music programs and initiatives affecting 70,000+ students in all 50 states. This is accomplished by making weekly donations to music projects in schools, as well as funding merit-based scholarships and extracurricular programs all over the country. Due to the impact of COVID-19,Â Joe Bonamassa andÂ Keeping the Blues Alive FoundationÂ launched theÂ Fueling Musicians Program,Â which is providing immediate cash payments for essential living expenses to help artists stay afloat and get back on the road again when it is safe.Â Individuals or organizations interested in helping Joe support this program should go to the Keeping the Blues Alive website,Â ktba.org. 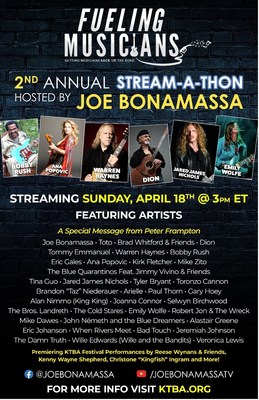