MonkeyBids will host a wide-range of auctions for jewelry, art, NFTs and more collectibles.

HONG KONG, Sept. 9, 2022 /PRNewswire/ -- After launching the first ever cross-chain NFT breeding and minting event in April 2022, Monkey Kingdom, recognized as the first Asian PFP NFT project to gain mainstream recognition, is introducing yet another breakthrough with a Web3 auction house named MonkeyBids. Built on the Solana blockchain, MonkeyBids is a decentralized auction house that provides low barriers of entry for auctions of virtual assets and physical luxury goods. Supported by the traceability and transparency of blockchain technology, MonkeyBids aims to reinvent the way auctions are being conducted. Monkey Kingdom is calling it the Degen Auction - place your bid if you're degen enough! 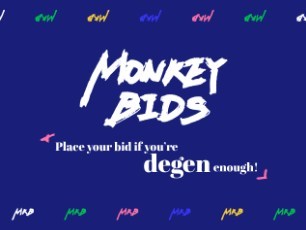 This decentralized application (dApp) intends to provide users with a Web3 auctioning experience whereby its on-chain program is driven by algorithms that mimic traditional auction house processes. The exception being that auction items can now change ownership instantly and the entire transaction history will be publicly visible on the blockchain. Monkey Kingdom is developing MonkeyBids after being the first Asian NFT collections to have two digital pieces auctioned off by leading contemporary art auction houses Sotheby's and three pieces auctioned off by Phillips. MonkeyBids will bring about transparency during the entire auction process, including publicly displaying a bidder's wallet address and the total number of bidders on all auctions, providing bidders with a more complete picture for decision making purposes. The community will also be able to participate in certain key aspects of MonkeyBids. This includes deciding on operational strategies and the overall direction of its development. In the future, the community can also decide on the fee structure and duration of auctions. MonkeyBids will reward its early supporters by granting them access to exclusive auctions of some of the most coveted and limited edition items.

"Online penny auctions have long been identified as a possible form of an internet scam due to the underlying way in which they have been designed," said Alice Wong, CEO of Monkey Kingdom. "Penny auction sites are at a privileged position to win auctions they host by outbidding all other participants at the very last moment, and simultaneously profit from all the service fees collected from the participation of all bidders. Furthermore, no one really knows whether the winner is actually the auction host or a bot programmed to outbid everybody. This is where MonkeyBids' Degen Auction comes in. Decentralizing penny auctions provides transparency to transactions and ensures that there's no foul play. We foresee increasing applications of blockchain technology within businesses in the future. By integrating digital certificates as NFTs to represent actual physical goods, we can easily trace the ownership history of auctioned items in the future. Such applications can already be seen in the Aura Blockchain development by LVMH and Cartier."

Along with Degen Auction, MonkeyBids will feature other auction styles including Dutch, English, Reverse auctions and more. MonkeyBids have lined up partnerships with Japanese brands and creators to auction off luxury goods, e.g., watches, wine, physical and digital artworks. Auctions will be conducted round the clock alleviating problems associated with bidders missing out due to time zone differences. MonkeyBids will also release a brand new SPL token integral to the operations of the auction house.Users will be able to use this token to bid on auction items, enjoying lightning-fast transactions with minimal transaction fees on Solana. Monkey Kingdom will release more information on the specifics of this token in the coming weeks.

About Monkey KingdomMonkey Kingdom consists of 3 collections of algorithmically generated NFTs inspired by the legendary Monkey King, Sun Wukong, the iconic protagonist in the 16th-century novel Journey to the West. The Genesis (Gen 1 & 2) consist of 2,222 and 2,221 algorithmically generated 32x32 pixel NFTs on the Solana Blockchain, the male Wukongs and the female Diamond Baepes; the Monkey Legends (Gen 3) consists of 10,000 male and female avatars designed to be fully customisable, metaverse-ready, and support whole new experiences.