VANCOUVER, BC, Oct. 5, 2021 /PRNewswire/ - Freeman Gold Corp. (CSE: FMAN) (OTCQB: FMANF) (FSE: 3WU) ("Freeman" or the "Company") is pleased to report results from initial metallurgical testing on drill core material from its Lemhi Gold Project in Idaho. The test work has shown consistently high gold extractions exceeding 95% over a wide spatial area for a range of head grades that vary between 0.4 to 2.1 g/t Au. The excellent leach response indicates that cyanide tank leaching, with a moderately ground sample using a gravity pre-treatment and leached for approximately 36 hours, results in gold recoveries up to 98%. The generated data will be employed towards future economic calculations for the in-pit resource that was released on July 8, 2021.

"We are extremely pleased with the initial metallurgical results," commented Paul Matysek, Executive Chairman. "The metallurgical results to date suggests that the oxide zone potentially continues at depth. This bodes well for the discovery of additional oxide material along strike and below the current resource."

The gold processing plan was developed and supervised by independent consulting metallurgist Mr. Frank Wright, P.Eng., of F. Wright Consulting Inc. Mr. Wright is a professional engineer and Qualified Person as defined by National Instrument 43-101 with over 25 years experience in the fields of mineral processing and hydrometallurgy. He has been principally involved in formulating the process philosophy and related flowsheet development that are suitable for advancing mineral projects into full economic evaluation. This has included studies for a variety of producers and exploration companies globally in the precious and base metal mining industry over the last three decades.

Mr. Wright states that, "The leach response at Lemhi has consistently, over a wide spatial area and grade range of the resource, provided gold recoveries in the mid to upper 90% range. The initial metallurgical response is very encouraging and strongly supports continued studies to advance the property into a preliminary economic assessment."

Freeman's 2021 metallurgical program consisted of two phases and was performed by SGS Mineral Services of Burnaby BC ("SGS"). The program ran tests on fourteen intervals and composites obtained from archived assay rejects originating from 2012 diamond drill core (Phase 1) and from two 2020 PQ diamond drill core intervals (Phase 2). These samples were used for both comminution and leach studies. The drill holes selected are distributed over a significant area of the resource and include samples at depths of 202 metres below surface (Figure 1). Figure 1 also includes drill holes selected for further metallurgical test work. 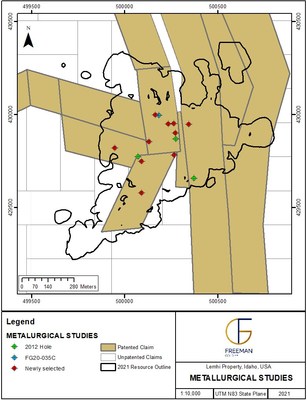 As further described in the Company's press release dated January 19, 2021, historical metallurgical test work had been performed in the 1990s by Kappes Cassiday and Associates, of Reno, Nevada. This work primarily focused on column leach testing to evaluate the merits of a heap leach facility. It resulted in an overall gold recovery averaging 70%, although near surface and higher grade materials provided significantly higher recovery. Based on this work the indicated equivalent heap retention would be well over 100 days.

Given the results of the historical testing, the bulk of the 2021 metallurgical program was directed primarily to evaluate tank leach procedures, suitable to carbon in pulp (CIP) treatment. This extractive process was pursued due to Lemhi's coarse grain gold component and overall higher gold grade nature as compared to a typical heap leach operation. CIP is well suited to deposits of this type in higher gold price environments. Heap leach is still being considered an option for lower grade materials.

SGS laboratory findings to date indicate that over a range of potential mill feed grades gold recovery from tank leaching ranges between 95% to 98%. This was achieved under moderate operating conditions using a leach feed particle size of approximately 80% passing 110 microns.Â  Preliminary comminution work index testing has also shown the resource material exhibits rock of an average hardness for crushing and grinding at depth and softer near surface.

Pre-treatment of the leach feed by centrifugal gravity concentration suggests one-third or more of the gold present may be recovered into an uncleaned gravity concentrate, suitable for intense cyanidation. This is relevant given the corresponding head grades indicate a significant portion of gold occurs as coarse particles.

Cyanide bottle roll testing was initially performed on archived 2012 assay rejects at various particle sizes.Â  Leach conditions adjusted pH with lime to pH 10.5, maintaining 1.5 g/L NaCN to start and operated for up to 48 hours. Various grind particle size were tested between 80% passing 80 microns to 200 microns, with a leach response consistently higher than 90% recovery. Subsequently, three master composites were compiled to represent low grade (LG=0.46 g/t Au), mid grade (MG=0.74 g/t Au) and high grade (HG=1.22 g/t Au) material. At a targeted feed grind of 80% passing 110 microns and 48 hours of leaching the resulting leach residue grades were between 0.02 to 0.07 g/t Au. This corresponded to a gold extraction for all three composites between 95% to 98%, indicating a consistent leach response over a wide range of head grades.Â  Further the leach kinetics show that most of the gold dissolution occurs rapidly as shown in Figure 2. 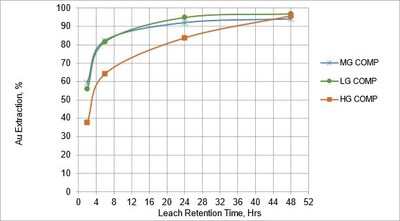 The kinetic curves in Figure 2 suggest a leach retention time of approximately 36 hours is appropriate, although higher grade samples may benefit from extended leach times. A similar test was performed for composites derived from the 2020 drill core which resulted in 96% gold recovery.Â

Preliminary laboratory data also suggests that sulphide bearing material, including pyrite or chalcopyrite intervals, could produce a potentially marketable flotation concentrate containing gold, along with flotation tailing suitable for CIP. This may become important should future exploration identify a resource in oxide transition into sulphide materials at depth.

FurtherÂ metallurgical test work (Phase 3) is slated to begin later this month at SGS on a further 27 composites of assay rejects. These rejects were obtained from split drill core intervals from the 2020 exploration program and average ~4-5 m in length to represent wide spatial areas and depths of the existing resource. These variability studies will help optimize process conditions for tank leaching and provide sufficient data in support of the undertaking of a preliminary economic evaluation of the project.

Freeman Gold Corp. is a mineral exploration company focused on the development of its 100% owned Lemhi Gold property (the "Lemhi Project"). The Lemhi Project comprises 30 square kilometers of highly prospective land. The project hosts a near surface, shallow, high grade oxide gold resource. The pit constrained National Instrument 43-101 compliant mineral resource estimate is comprised of 749,800 oz gold ("Au") at 1.02 grams per tonne ("g/t") in 22.94 million tonnes (Indicated) and 250,300 oz Au at 1.01 g/t Au in 7.83 million tonnes (Inferred). The Company is focused on growing and advancing the Lemhi Project towards a production decision. The technical content of this news release has been reviewed and approved by Dean Besserer, P.Geol., VP Exploration of the Company and a Qualified Person as defined by National Instrument 43-101.

On Behalf of the Company William Randall President & CEO

Neither the Canadian Securities Exchange nor its regulation services provider accepts responsibility for the adequacy or accuracy of this release. 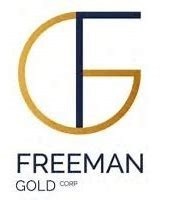