THE CUBAN"The Cuban pulls together music, romance, loss, and memory into an EMOTIONAL TALE that SPANS CULTURES and GENERATIONS" - RogerEbert.com 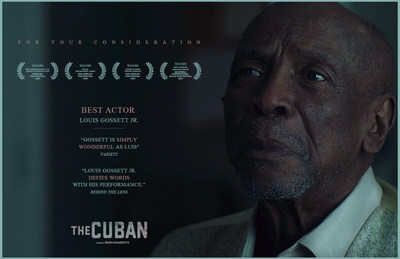 Due to COVID-19 restrictions, THE CUBAN was successfully released via drive-in theatres in Canada, as well as hard top and virtual cinemas in over 50 markets across the US in summer 2020.Â  The release followed the film's 2019/2020 festival run, including the Los Angeles Pan African Film Festival and the Montreal Black Film Festival, winning top awards at each.

In THE CUBAN, Louis Gossett Jr. expands his repertoire of exceptional performances in the role of Luis, an elderly Cuban musician.Â  Luis has Alzheimer's and spends his time retreated inside his own mind until a care worker, Mina, plays music from his youth. Â As each day passes, the Afro-Cuban jazz she plays awakens Luis a little more until the colourful world of his past becomes vibrant and real again.

THE CUBANÂ is up for consideration in all Academy Awards Nomination categories, including Best Actor for Louis Gossett Jr., Best Supporting Actress for Shohreh Aghdashloo and Best Original Song, "El Milagro" for Hilario Duran.