CLARENCE, N.Y., March 29, 2021 /PRNewswire/ --Â High-performance SUVs and trucks are asserting their rightful place as highly desirable automotive collectibles. None has been more sought-after than the RAM 1500 TRX, which was named Motor Trend's 2021 Truck of the Year after setting new standards for power and off-road capability.Â  This past Friday, at Barrett-Jackson's March 2021 Auction in Scottsdale, AZ, the very first TRX to roll off the production line was auctioned for charity.Â  The demand for VIN 001 was so great that the winning bid of $410,000 by Dan Snyder Motorsports was more than 4 times the vehicle's MSRP.Â  The proceeds will be donated in their entirety to the United Way of Southeast Michigan's 2-1-1 Helpline, which supports veterans and their families.Â  Dan Snyder commented afterward, "Charity auctions are a double win for me â I get to feed my love for performance vehicles while contributing to a worthy cause.Â  What could be better." 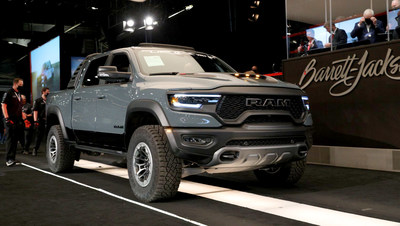 RAM 1500 TRX VIN 001 will be very comfortable in its new home, surrounded by more than 100 modern American performance vehicles, including such Mopar notables as the very last Dodge Viper and Demon ever produced; the only Carroll Shelby Dodge Viper GTS/CS coupe ever produced; and the two Vipers â sponsored by Dan Snyder Motorsports â that set the track record for American and manual transmission vehicles at the legendary NÃ¼rburgring in 2017.

The credentials presented by the RAM 1500 TRX for admission to such august company are impressive.Â  Powered by RAM's iteration of the Hellcat engine, a supercharged HEMI 6.2 liter V8, the TRX outputs 702 horsepower and does 0 â 60 in 4.1 seconds, covering the Â¼ mile in 12.7 seconds â all this from a vehicle with a curb weight of 3.5 tons.Â  Massive 35-inch Goodyear all-terrain tires, a nitrogen-charged remote reservoir shock system, and a new rigid aluminum frame gives the TRX legitimate off-road bona fides as well

Not only is VIN 001 the first TRX produced, it's also the very first of a limited 702-truck Launch Edition, featuring an anvil gray exterior and a black, leather interior with red accents.Â

Dan Snyder Motorsports has been in the spotlight frequently of late, with several acquisitions that complement an already outstanding collection of historic vehicles, including the last front engine Corvette ever-produced and the 2017 Ford GT personally owned by Ford VP of Design, Moray Callum â only the 4th second generation GT produced.Â  In discussing the strategy he's followed in assembling such an impressive automotive array, Dan Snyder said, "The American performance vehicles produced in the last couple of decades are pinnacles of both engineering and design â and we may never see their like again. Â What makes these cars and trucks so special is not just that they're beautiful works of art, but that they're absolutely exhilarating when you're behind the wheel.Â  I believe it's a driving experience that should never be lost â and I'm determined to preserve that legacy for everyone who shares a passion for it."