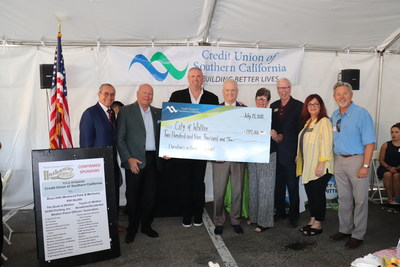 The donations, ranging from $1,000 to $45,000, were distributed in June through July and totaled $228,500. As an homage to the credit union's founding city, roughly 90% of the donations went to Whittier-based charitable organizations.

During the charitable tour, CU SoCal team members met with local non-profit organizationsâeither virtually or in-personâthroughout Whittier and the nearby cities of Brea, Fontana, Fountain Valley, and La Habra to surprise them with news of the donations.

During the event, Dave Gunderson, CU SoCal President and CEO, presented a check for $6,000 to the Whittier Chamber of Commerce, along with a check representing the $209,000 in combined donations dedicated to local Whittier charities.