WASHINGTON, Dec. 2, 2021 /PRNewswire/ -- Today, Consumers' ResearchÂ released a Consumer WarningÂ to help create awareness of BlackRock's of close ties to the Chinese Communist Party and inform U.S. consumers that BlackRock is taking their money and betting on China. 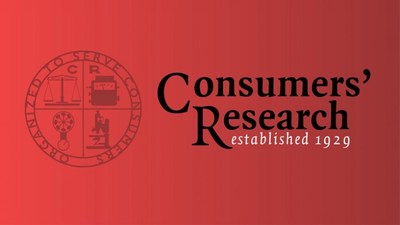 In the Warning, Consumers' Research outlines in detail BlackRock's ties to China, dating back to the early 2000s and shines a light on BlackRock's CEO Larry Fink's personal relationships with China's communist leadership as well.

The Warning also lists the top ten states whose public pension funds are invested with BlackRock, including Nevada with a reported total of $9.7 billion.

"Today BlackRock manages nearly $10 trillion of Americans' hard-earned money," said Will Hild, Executive Director of Consumers' Research. "Consumers deserve to know what BlackRock is doing with that money. What we've seen is that while BlackRock is virtue signaling in the United States, they're choosing to aid our enemies with American pension dollars."

The release of the Consumer Warning comes after new findings in the 2021 Report to Congress,Â which highlights the economic and national security risks of U.S. financial dealings with China, and BlackRock's decision to seemingly double-down on its investmentsÂ in the country with no regard for the Congressional report.

As part of their effort to make Nevadans aware of the vulnerability of their pensions, Consumers' Research will also be launching a targeted digital campaign featuring this ad. Earlier this Fall, the consumer protection group also released this hard-hitting TV adÂ focused on BlackRock's relationship with the Chinese Communist Party.

"We cannot let executives like Larry Fink try and tell Americans how to live while simultaneously cozying up to one of the world's leading human rights abusers," said Hild. "Telling Americans how to behave, while ignoring China's many environmental and human rights abuses is hypocritical in the worst way. Consumers deserve to know when woke companies are taking advantage of them and their assets."

You can view the Consumer Warning here.

To read more about Consumers' Research and its more than 90-year-history, click here.