"I am truly honoured to be recognized by the Living Legends of Aviation and join men and women who have made significant contributions to our industry," said Marc Parent. "My professional journey has been enormously fulfilling. At a time whenÂ we need to encourage young people to pursue a career in aviation, especially as pilots, I hope the stories of today's aviation Legends inspire the next generation to take to the skies and become the Legends of tomorrow."

Throughout his career, Marc has helped shape the aerospace industry in Canada and around the world. His contribution was recognized in 2020 when he was appointed a Member of the Order of Canada - one of the country's highest honours - and in 2021 when he was inducted into Canada's Aviation Hall of Fame. Under his leadership, CAE has become a global leader in training pilots and crew members, a symbol of excellence globally, with a noble purpose to make flying safer.Â

Marc joined CAE in 2005 and became President and CEO in 2009. He led the company's growth beyond simulation products to become the largest provider of civil aviation training services and a global leader in training and mission support solutions for defense & security forces, and healthcare sectors. Through its broad global network of more than 60 training locations, CAE serves all sectors of aviation, includingÂ  the world's airlines, business and helicopter operators, and defense forces. Parent is a firm believer in good corporate citizenship. During the pandemic, CAE manufactured much-needed ventilators and administered 33,000 injections at its corporate vaccination centre. He also led CAE to become carbon neutral as of September 2020 â the first Canadian aerospace company to achieve this goal.

Today, Marc Parent is heading a corporate transformation, positioning CAE as a high-tech leader, bringing the digital and physical worlds closer together through technology. With nine acquisitions since March 2020, CAE has significantly increased its capabilities and expanded its offering.

Marc Parent's passion for aviation was sparked as a young boy. At just 17, he earned his pilot's licence, two years before his driver's permit. Parent graduated from Mechanical Engineering at Montreal's Ãcole Polytechnique in 1984, and joined Canadair as an engineer on the Challenger and Canadair Regional Jet programs. He rose through the ranks, and assumed responsibility for all Bombardier aircraft development programs. In the early 2000s, he ran Bombardier's U.S. Operations, including the Learjet manufacturing facility, and was then appointed Vice President and General Manager of the Challenger and CRJ aircraft programs.

About Living Legends of AviationThe "Living Legends of Aviation" are a group of 100 remarkable people of extraordinary accomplishment in aviation.Â  The Legends are aviation entrepreneurs, innovators, astronauts, industry leaders, record breakers, pilots that have become celebrities and celebrities that have become pilots. They gather each year to celebrate individual accomplishments and advancements during aviation's 2nd hundred years. The event is produced by Kiddie Hawk Air Academy, an organization that educates and sparks children's interest in aviation.

About CAECAE is a high technology company, at the leading edge of digital immersion, providing solutions to make the world a safer place. Backed by a record of more than 70 years of industry firsts, we continue to reimagine the customer experience and revolutionize training and operational support solutions in civil aviation, defense and security, and healthcare. We are the partner of choice to customers worldwide who operate in complex, high-stakes and largely regulated environments, where successful outcomes are critical. As testament to our customers' ongoing needs for our solutions, over 60 percent of CAE's revenue is recurring in nature. We have the broadest global presence in our industry, with more than 11,000 employees, 180 sites, and training locations in over 35 countries. www.cae.com

Note to EditorsHigh-resolution photos of the Living Legends event are available for download at www.cae.com/multimedia-centre 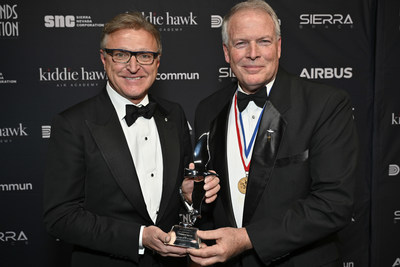