$5,000 Donation and Trans Voices Live House on Platform to Further LGBTQ Cause

LOS ANGELES, March 30, 2021 /PRNewswire/ --Â Â Bigo Live, a global leader in live streaming and entertainment, is pleased to announce it is pledging $5,000 to The Trevor Project, the world's largest suicide prevention and crisis intervention organization for LGBTQ (lesbian, gay, bisexual, transgender, queer and questioning) young people. This donation marks the company's continued commitment to The Trevor Project which kicked off with World AIDS Day initiatives in 2020. In honor of the International Transgender Day of Visibility, Bigo Live will be hosting a Trans Voices Multiguest panel on March 31 at 4:00 p.m. PST, featuring prominent transgender members of theÂ Bigo Live community. "Bigo Live has always been a strong supporter of the transgender community and takes pride in providing a global stage during the International Transgender Day of Visibility," said James Wang, Senior Vice President of Bigo Live. "This partnership with The Trevor Project will help amplify voices within Bigo Live's LGBTQ and transgender family, allowing all users to learn and spread awareness and positivity throughout the entire platform."

Bigo Live's Trans Voice Live House is dedicated to transgender creators, covering a wide array of topics as well as question and answer sessions. The panelists will speak candidly about overcoming challenges and obstacles as transgender individuals. The discussion will help facilitate an open dialogue and encourage frank conversations around coping with mental health issues such as depression and anxiety.

According to statistics provided by The Trevor Project, one in three transgender youth reported attempting suicide, almost one-third reported being a victim of sexual violence and more than half reported a two-week period of depression. Promising numbers show that 90 percent of young people who reach out to The Trevor Project experience de-escalation from suicidal thoughts.

Bigo Live is one of the world's fastest-growing live streaming social communities where users broadcast in real-time to share life moments, showcase their talents, and interact with people from around the world. Bigo Live has around 400 million users in over 150 countries and is currently the market leader in the live streaming industry. Launched in March 2016, Bigo Live is owned by Bigo Technology, which is based in Singapore.

About The Trevor Project 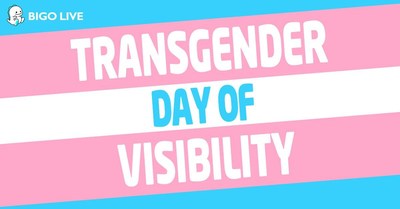