Now 43 Million Americans from Every Anthem Plan Can Access Clinical, Financial, and Formulary Data with OneRecord

NEW YORK, Nov. 2, 2021 /PRNewswire/ -- OneRecord further scales the reach of its Insurance Module by adding Anthem to their list of Connected Payers. Now anyone in the United States with any Anthem plan can get their clinical, financial, and formulary data in their OneRecord. 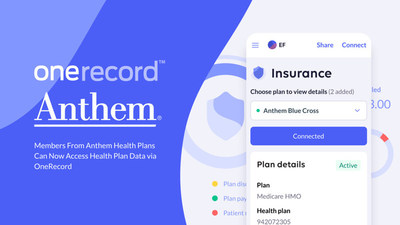 OneRecord, a digital health company, has emerged as the leader in empowering consumers with access to healthcare data from their past and present health plans. Since July 1st, 2021, when the 21st Century Cures Act Interoperability and Patient Access Final Rule (CMS 9115-F) went into effect, OneRecord has made compliance for Insurance companies a priority by partnering with payers to validate their Patient Access APIs.Â

AnthemÂ is unique in that its Patient Access API covers every one of its 43 million members. Anthem's decision to extend the API to all members and not just those plans mandated by the CMS regulation shows their commitment to making Patient Access a reality for all members. While many Payers have indicated plans to make the Patient Access API available to all of their members, as of this release, Anthem is one of a short list of Payers to follow through with their pledge. Anthem is a shining example of both the intent and implementation of the 21st Century Cures Act.

"We're so excited to deliver data access to Anthem's 43 million members - that's 1 in 8 Americans. This launch is a tremendous addition to our connected payer's list," says CEO and Co-Founder of OneRecord, Jennifer Blumenthal. "Our team is focused on connecting to every Payer in the country in support of the upcoming requirements for Payer to Payer data exchange. We're building the most comprehensive Payer FHIR directory that will enable true interoperability for both Payers and Providers, but most importantly, consumers."