On a monthly basis, February 2020 was the highest volume month of the year, at just over 4.8 billion calls, far below the all-time peak of just under 5.7 billion robocalls in October 2019. When the pandemic hit hard in April 2020, just two months later, we saw the lowest month at just under 2.9 billion robocalls, a massive drop in short order. However, robocalls started increasing again after that, finishing the year by bouncing around the 4 billion calls/month level. 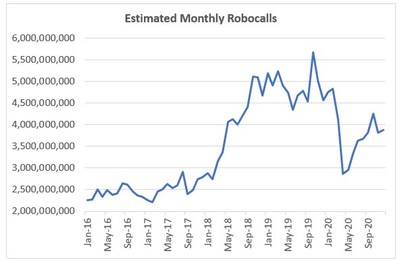 "We've once again had over 100 billion robocalls over the past two years combined," said YouMail CEO Alex Quilici. "While the pandemic helped reduced robocall volumes materially, we're still at levels that were considered outrageous a few years ago."

Several key learnings from 2020 include:

Even with a dramatically reduced volume of robocalls in 2020, there were over 20 billion scam calls during the year and another 6 billion telemarketing calls, together totaling just under 60% of all robocalls.

Despite these large numbers, individual consumers had a very different view of the robocall problem depending on the states where they resided.

Perhaps the best measure of the pain of robocalls is how many each person gets on average. Last year the only locale that got more than one robocall per day was Washington D.C., whose residents got an estimated 423 robocalls per person, which works out to roughly 1.2 per day. Two other states got more than 5 per week: Louisiana at 262, and South Carolina at 260. On the other side of the scale, residents of Alaska got 39 per year, which is significantly less than 1 per week.

Where These Robocall Estimates Come From

These data are provided by YouMail, a free robocall blocking app for mobile phones. YouMail recently won the American Business Awards' Gold Stevie Award for Technical Innovation of the Year, and the YouMail app was named the nation's best robocall-blocking solutionÂ in a competition organized by Geoffrey Fowler of the Washington Post.

YouMail blocks unwanted robocallers by making sure the user's phone doesn't ring, and then plays an out-of-service message that leads them to think they dialed an invalid number. YouMail identifies problematic numbers and robocalls using a combination of its recently patented audio fingerprinting technology, call patterns, and consumer feedback.

YouMail provides the YouMail Robocall IndexÂ to estimate robocall volume across the country and for specific area codes every month. This estimate is formed by extrapolating from the behavior of the billions of calls YouMail has handled for its users, and these statistics are regularly cited by the FCCÂ as a definitive source for national data trends.Â Â

For a full ranking of cities, states and area codes, as well as details on the behavior of robocallers in each area code, please see http://robocallindex.com. To listen to actual voice messages left by robocallers, please visit the YouMail Directory. To join the YouMail Robocall Index mailing list, please write to RobocallIndex@YouMail.com.

About YouMail, Inc.YouMail, Inc. provides security-first, cloud-based communication services for mobile phones. YouMail's free app-based service uses sophisticated, patented technology to block robocalls and phishing messages, protecting users from spam, identity theft, stalkers, and corporate fraud. Our premium call management services provide virtual receptionist and virtual number services, and they are designed for people who use their mobile phone for business. These services help them unify virtual numbers with their cell number, handle high volumes of mobile calls, and provide personalized answering experiences for their callers. YouMail's communications platform handles over a billion calls per year for over 10 million users, and our users range from everyday consumers to sole proprietors to the CEOs of the largest companies in America. TheÂ YouMail Robocall Indexâ ¢, since its launch in in September 2015, has emerged as the nation's definitive source on robocalling data for telecom carriers, smartphone and app companies, and public policymakers.Â  YouMail, Inc. is privately funded and based in Irvine, California.