A Colorful Streak for Non-Machineable Mail

ESTES PARK, Colo., March 9, 2021 /PRNewswire/ --Â With rich purples, browns, reds and black on a square field, the cleverness of the Colorado hairstreak butterfly is featured by the U.S. Postal Service on a stamp dedicated today during a virtual ceremony. 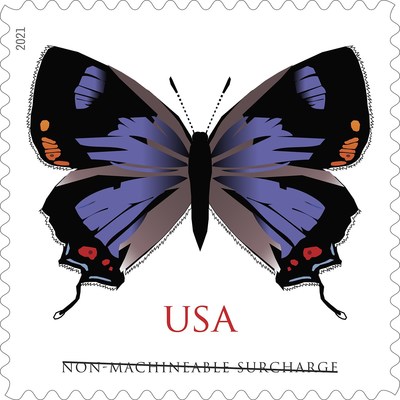 The new stamp is now being sold at Post Office locations nationwide and online at usps.com.

"The Colorado hairstreak butterfly is not only a beautiful creature, it is the state insect for Colorado," said dedicating official, William D. Zollars, a member of the U.S. Postal Service Board of Governors. "This stamp is the eighth in the butterfly series, developed in partnership with the greeting card industry specifically for oversize or square envelopes and other mail of nonstandard shapes and sizes."

Zollars was joined for the ceremony by Dr. Paul A. Opler, Professor, Department of Agricultural Biology, Colorado State University and an internationally known authority on lepidoptera, which is the study of moths and butterflies. The ceremony can be viewed on the Postal Service Facebook and Twitter pages.

Nationally acclaimed artist Tom Engeman digitally created the stamp design using images of preserved butterflies as a starting point. The result is a highly stylized, simplified image of a Colorado hairstreak, rather than an exact replica, which designer Derry Noyes used to create the stamp.

The Colorado Hairstreak is being issued as a pane of 20 stamps, with the words "NON-MACHINEABLE SURCHARGE" on the stamp indicating its usage value. Like a Forever stamp, this stamp will always be valid for the rate printed on it. News of the Hairstreak stamps is being shared with the hashtag #COHairstreakStamps.

The shimmering, purple Colorado hairstreak butterfly (Hypaurotis crysalus) begins life as a fuzzy green caterpillar which feeds on its host plant, the Gambel or "shrub" oak, in Colorado, Arizona, New Mexico, Utah and much of the Southwest. After metamorphosis, the butterfly emerges from its cocoon in late spring or summer, mates and lays eggs in autumn, and throughout all, may live in its entire lifespan within a few yards of where it hatched.

Males and females are similarly colored. On both the forewing and the hind wing, the dominant purple is surrounded by dusky grey-brown margins accented with several orange spots near the lower, outer extremes on each wing. A thin white fringe outlines the wings. Underneath, the Colorado hairstreak is mostly grey, with darker, lighter and orange markings. Also, on the underside of the wings, are spots that resemble eyes and the thin streaks that give the hairstreak its name.

Hairstreaks also provide an example of nature's ability to adapt. On its hind wings are slender tails â hair-like appendages that resemble antennae. The illusion is enhanced by the hairstreak's habit of pointing its abdomen upward with the false antennae held high, bobbing like real ones. This evolutionary gambit tricks predators into attacking the false head on the wing instead of the butterfly's actual head. The butterfly can escape from attack, saving its body and leaving a hungry bird with an unsatisfying piece of scaly wing.

Customers may purchase stamps and other philatelic products through the Postal Store at usps.com/shopstamps, by calling 800-STAMP24 (800-782-6724), by mail through USA Philatelic, or at Post Office locations nationwide.

Forever stamps will always be equal in value to the current First-Class Mail 1âounce price.

A video of the ceremony will be available on facebook.com/usps. Information for ordering first-day-of-issue postmarks and covers is at usps.com/shop.

The Postal Service receives no tax dollars for operating expenses and relies on the sale of postage, products and services to fund its operations.