LOS ANGELES, March 26, 2021 /PRNewswire/ --Â Social music app, Geojam, is partnering with 24kGoldn to celebrate the release of his new album, El Dorado, and to reward some of his most loyal fans. Starting March 29th, 24kGoldn's fans can compete on the Geojam app to win the once-in-a-lifetime opportunity to get on a private jet from LA to his hometown in San Francisco to spend the day with him. They will dine in the Outer Mission, shop at DreamteamSF and check out the views from Twin Peaks before flying back to LA. Fans also have the opportunity to win a chance to play Connect Four with 24kGoldn, score some branded merch and limited edition signed sneakers.

Recording artist 24kGoldn (Golden Landis Von Jones) best known for his #1 Billboard Hot 100 hit, 'Mood', and for making history as the first rapper from San Francisco to ever be certified platinum said, "I'm excited to work with Geojam because I'm a strong believer that for artists nothing matters more than the music you're making and the connection you're sharing with your fans. I think there's no better way to connect with your fans than giving them the chance to have unique experiences and create memories with you and own a piece of your life and your lifestyle."

"Working directly with 24kGoldn and his team on this experience has truly been an exciting moment in our company's history. Not only is Golden an exceptionally talented artist, but he's passionate about his fans. As a company whose mission is for everyone to experience moments together, we couldn't be more excited to give fans the opportunity of a lifetime with one of the world's top artists," Sarah Figueroa, Co-Founder and CEO of Geojam.ABOUT 24KGOLDN2020 XXL Freshman 24kGoldn broke into the scene late 2019 with his Platinum debut single, "Valentino" after signing to RECORDS/Columbia Records. Led by an initial burst on TikTok and surpassing 400 million total global streams, the now 20-year-old showed the world his sound was universal, with the track appearing on over 40 Spotify Viral 50 lists internationally. 24kGoldn wrapped 2019 with the release of his genre-bending 8 track EP, Dropped Outta College, which had a multiple-week run at #1 on the Billboard Heatseekers Chart. The EP includes his second Platinum single "City Of Angels," which also appeared on over 40 Spotify Viral 50 charts and has over 375 million global streams to date. Goldn's latest single "Mood" featuring Iann Dior has completely captured the masses and become a cultural phenomenon. The song spent 8 weeks at #1 on the Billboard Hot 100 chart and on the Pop radio chart, where it set the record for most spun song in a 7 day period. The global hit has accumulated over 1.3 Billion streams to date and has attained certifications in over 20 countries worldwide, including 3x Platinum in the US. The song landed on several 'Best Songs of the Year' lists from XXL, Billboard, SPIN, Stereogum, NYLON, New York Times, Rolling Stone and more.

ABOUT GEOJAMGeojam is a tech music startup that is completely revolutionizing the way artists and fans connect, share and discover new music and experiences. The social music platform is innovating the music industry as the ultimate community and rewards-based app that allows users to engage with artists. Every action earns points that can be redeemed for exclusive experiences with their favorite artists, limited edition items and merchandise. 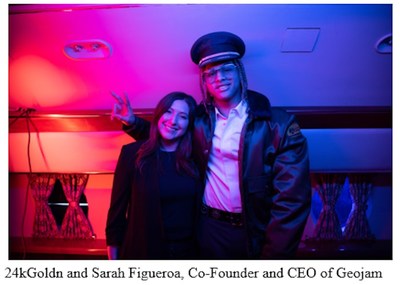