Vancouver, British Columbia--(Newsfile Corp. - July 26, 2021) - Battery Mineral Resources Corp. (TSXV: BMR) ("Battery" or "BMR" or the "Company") is pleased to announce it has commenced the first phase of exploration and resource infill drilling at the recently producing Punitaqui mine complex ("Punitaqui") in Chile. 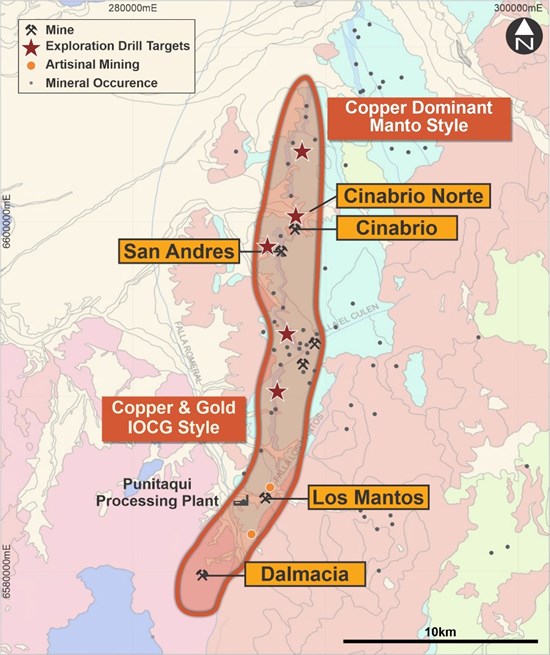 Prior to 1998, only limited extraction of high grade copper oxides was undertaken at San Andres by small groups of local miners. In 2000, a Chilean national company La Empressa Nacional de Mineria ("ENAMI") developed carried out two underground exploration drives targeting copper sulphides. In 2005, via an option process, San Andres became part of the Punitaqui mine complex.

In 2007, a ground geophysical induced polarization ("IP") survey was completed on 250m - 500m spaced lines across the San Andres-Cinabrio area. The results of the IP survey line across the southern end of the San Andres zone identified a strong chargeability anomaly interpreted to represent potential extensions of the copper sulphide mineralization at depth and along strike. 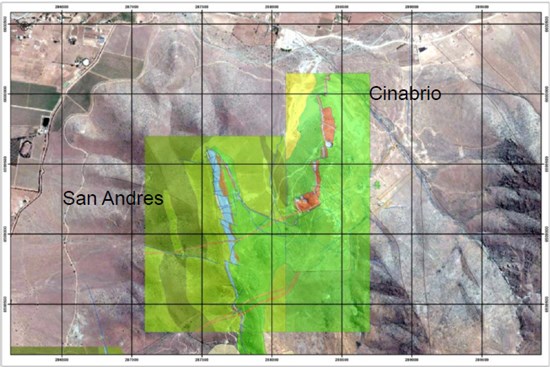 The recently producing Cinabrio copper deposit is interpreted as an Iron Oxide Copper Gold ("IOCG") type manto deposit. The known mineralization has a strike length of about 750 meters and the mineralisation is between 10 - 30 meters thick. The mineralized horizon thickness is very continuous up to a depth of around 700 meters. Chalcopyrite and minor bornite and pyrite comprise the known deposit mineralogy and the mineralized horizon dips steeply to the east and is sometimes fault-displaced.

Immediately to the southwest of the Cinabrio deposit is San Andres, which is the faulted offset of the top of the Cinabrio orebody. As currently defined, the mineralized zone at San Andres is approximately 10 meters thick and varies from 5m to 30m (Figure 3).

San Andres is a tabular sedimentary horizon within a volcanic sequence. This sedimentary horizon is variably mineralized and has a variable width ranging from 5m - 30m. It consists of an interlayered volcano-sedimentary sequence composed of dark colored laminated and unlaminated shales, volcanoclastic sandstone, conglomerates and breccias and tuff breccias. There is a variable component of syngenetic pyrite. The horizon dips 40 to 50 degrees to the east and is cut-off at depth by the moderately west dipping San Andres fault.

Mineralization consists of veinlets and irregular disseminations in both the fine and coarse-grained clastic rocks and locally within the volcanic rocks above and below the host unit. The host horizon is also cut and offset by other faults with a wide range of orientations. The principle orientations identified to date include:

The host sedimentary unit at San Andres is in a north-northwest trending ridge. The surface trace of the mineralized unit crosses from the east side of the ridge in the northern part of San Andres to the western side of the ridge in the southern part. The east dipping host unit is dipping at a shallow angle into the topography in the north and at a very steep angle into the topography in the south. For this reason, the depth of oxidation of the mineralization is expected to decrease significantly in the south.

The current 6,000m resource expansion program will focus on San Andres, which is the "normal" fault-displaced upper portion of the adjacent high grade Cinabrio mine. Cinabrio was last in production by Xiana Mining as recently as April 2020 and previous to that was mined by Glencore for approximately 8 years. The San Andres target has established underground ramp access.

Historic drilling at San Andres has identified copper mineralisation over about an 800m strike based on 100m spaced drill sections. The zone extends from surface with potential at depth and along strike in both directions (Figure 4 and Figure 5).

Currently two diamond core drill rigs are operating at San Andres with a third rig expected in early August. The San Andres drill program is designed to infill previous drilling and further the resource extensional drilling to the north and the south (Photo 1 and Photo 2). The current phase of planned drilling comprises 6,000m in 31 drillholes.

Battery CEO Martin Kostuik states; "We are pleased announce that our San Andres infill drilling program is now underway with two drills running and a third drill soon to be added. Organizing and commencing a drill program so soon after the close of the Punitaqui acquisition is an impressive achievement. San Andres was an obvious target to launch our program as it is located just 500m southwest of the Cinabrio copper mine and has established underground ramp access. Earlier wide-spaced historic drilling has identified an 800m long zone that is open at depth and in both directions along strike. We believe this resource drilling program has the potential to provide the Company with a second source of copper ore along with existing ore remaining in Cinabrio. The results of the program will be the catalyst for a new Technical Report that will be our road map to near-term copper production at Punitaqui." 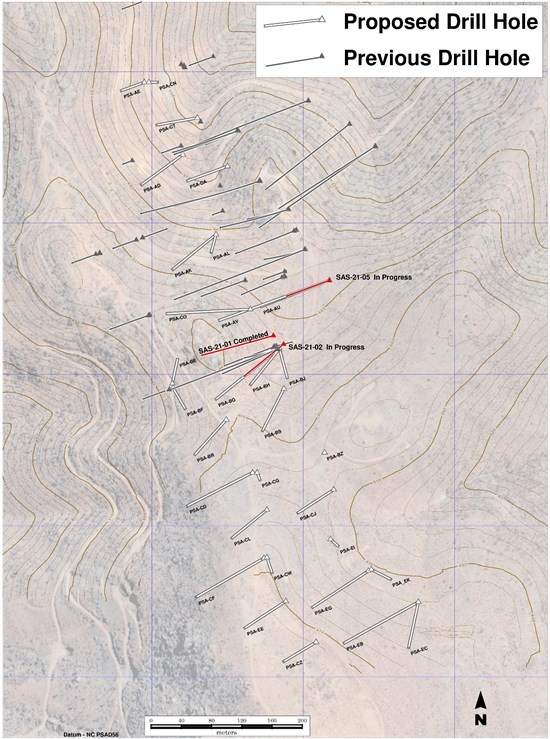 The Punitaqui mining district is located approximately 35 km South of Ovalle in Region IV of Chile.

Punitaqui was discovered in 1780 and was exploited by and for the Spanish government. Historical records of Punitaqui total production and activity are poor. Cinabrio, has been worked periodically since 1968, focussed on exploitation of copper oxides.

In 1965, a geophysical study of induced polarization was conducted and subsequently 141m meters of diamond drilling completed.

Between the months of July and November 1972, 19 diamond drillholes were completed, totaling 630m followed by development of the main access to level 410.

In 2004, the property was acquired by CMC which applied for an exploitation permit based on a sublevel stoping mining plan.

In 2010, Glencore International Plc acquired the project and developed the Cinabrio deposit.

In 22 May 2018, Xiana Mining Inc. acquired the property and commenced operations.

BMR's holding include three areas which have established underground access including the Cinabrio, San Andres and Dalmacia.

Punitaqui is a past producing mining operation which consists of an integrated copper-gold mining complex. The site is fully permitted and includes a centralized process plant which was fed by the Cinabrio mine and satellite, underground zones at San Andres and Dalmacia.

The process plant consists of a standard copper sulphide crush-grind-flotation circuit to produce a marketable copper-gold concentrate for domestic and foreign smelters. The plant historically operated at a permitted capacity of 3,000 tonnes per day ("tpd") with allowances to 3,600tpd, with a potential capacity of 4,000tpd to be investigated.

The Punitaqui project is situated within a 25km long mineralized district that is a classic IOCG and mantos style copper belt that is comprised of mantos and structural controlled copper-gold-silver veins. 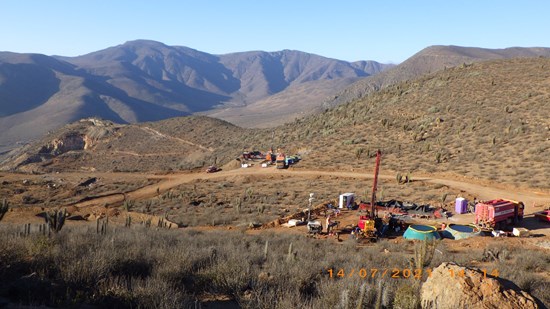 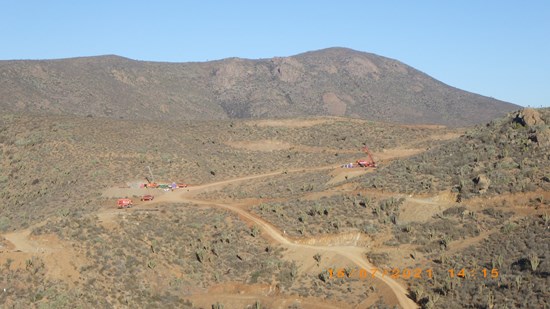 Sample preparation is performed ALS Global ("ALS") - geochemistry analytical lab in La Serana, Chile and sample analyses by ALS in Lima, Peru. ALS analytical facilities are commercial laboratories and are independent from BMR. All BMR samples are collected and packaged by BMR staff and delivered upon receipt at the ALS Laboratory in Chile. Samples are logged in a sophisticated laboratory information management system for sample tracking, scheduling, quality control, and electronic reporting. Samples are dried then crushed to 70%

Michael Schuler, Battery Mineral Resources Corp. Chile Exploration Manager, supervised the preparation of and approved the scientific and technical information in this press release pertaining to the Punitaqui Exploration Drill Program. Mr. Schuler is a qualified person as defined by National Instrument 43-101 - Standards of Disclosure for Mineral Projects.

Battery is a multi-commodity resource company which provides investors with exposure to the world-wide trend towards electrification. Battery is engaged in the discovery, acquisition, and development of battery metals (cobalt, lithium, graphite, nickel & copper), in North and South America and South Korea with the intention of becoming a premier and sustainable supplier of battery minerals to the electrification marketplace. Battery is the largest mineral claim holder in the historic Gowganda Cobalt-Silver Camp, Canada and continues to pursue a focused program to build on the recently announced, +1 million pound cobalt resource at McAra by testing over 50 high-grade primary cobalt silver-nickel-copper targets. In addition, Battery owns 100% of ESI Energy Services, Inc., a pipeline equipment rental and sales company with operations in Leduc, Alberta and Phoenix, Arizona. Finally, Battery is currently developing the Punitaqui Mining Complex, and pursuing the potential near term resumption of operations at the prior producing Punitaqui copper-gold mine. The Punitaqui copper-gold mine most recently produced approximately 21,000 tonnes of copper concentrate in 2019 and is located in the Coquimbo region of Chile.

Neither the TSXV nor its Regulation Services Provider (as that term is defined in the policies of the TSXV) accepts responsibility for the adequacy or accuracy of this press release.

This news release includes certain "forward-looking statements" under applicable Canadian securities legislation. There can be no assurance that such statements will prove to be accurate, and actual results and future events could differ materially from those anticipated in such statements. Forward-looking statements reflect the beliefs, opinions and projections of the Company on the date the statements are made and are based upon a number of assumptions and estimates that, while considered reasonable by the Company, are inherently subject to significant business, economic, competitive, political and social uncertainties and contingencies. Many factors, both known and unknown, could cause actual results, performance, or achievements to be materially different from the results, performance or achievements that are or may be expressed or implied by such forward-looking statements and the parties have made assumptions and estimates based on or related to many of these factors. Such factors include, without limitation, the ability of the Company to obtain sufficient financing to complete exploration and development activities, risks related to share price and market conditions, the inherent risks involved in the mining, exploration and development of mineral properties, government regulation and fluctuating metal prices. Accordingly, readers should not place undue reliance on forward-looking statements. Battery undertakes no obligation to update publicly or otherwise revise any forward-looking statements contained herein whether as a result of new information or future events or otherwise, except as may be required by law.

To view the source version of this press release, please visit https://www.newsfilecorp.com/release/91189