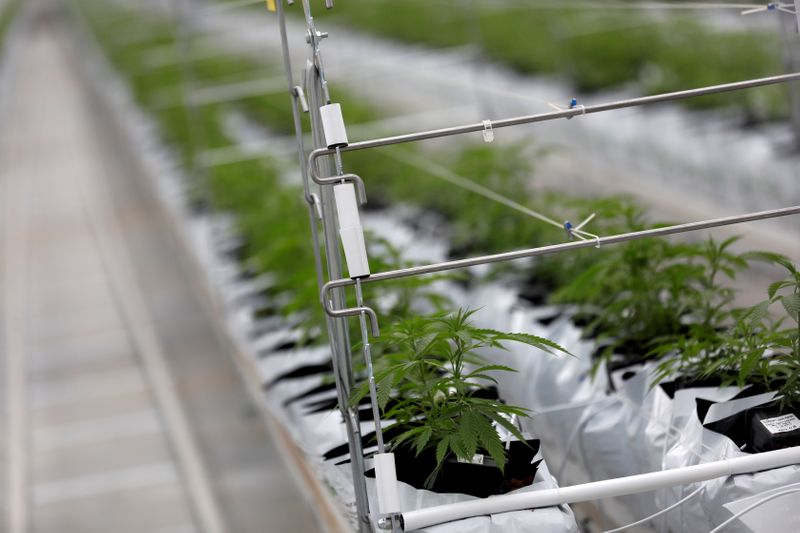 By Shariq Khan and David Randall

(Reuters) - Shares in cannabis companies blazed to fresh highs on Wednesday, as strong interest from retail investors appeared to signal the recent trading frenzy behind recent Reddit favorites such as GameStop may be shifting to other stocks.

Shares of Tilray jumped more than 50%, while shares of Canopy Growth Corp rallied more than 6% and Aurora Cannabis Inc rose over 20%. The ETFMG cannabis stocks exchange-traded fund, which has more than doubled in value since November's U.S. presidential elections, gained nearly 15%, while the broad S&P 500 index was flat.

The moves came as posts touting cannabis stocks - which have surged on hopes of legislative changes under President Joe Biden - as the next GameStop spread throughout the popular WallStreetBets forum on Reddit.

"I missed the Gamestop boat, but I don't think we're gunna miss this one," one user wrote https://www.reddit.com/r/wallstreetbets/comments/lgrc39/daily_discussion_thread_for_february_10_2021.

Retail investors helped drive a "short squeeze" rally that pushed shares of the video game retailer up more than 1,650% and sparked surges in other "meme stocks" in January, before a reversal earlier this month eliminated most of those gains.

Short interest in Tilray - a measure of the stockâs price and number of shares borrowed on bets that the price will fall - stood at about 37% on Wednesday, compared to 27% at the end of January, according to financial analytics firm Ortex.

Estimated short interest in GameStop, meanwhile, declined to 39% of freefloat versus exchange estimates of 46% at the end of January, Ortex data showed.

WallStreetBets has become a must-watch for traders at financial institutions since concerted action by some of its 8 million participants proved enough to force deep losses in a handful of short-selling hedge funds in January.

"I don't think the retail punter story goes away overnight," said Mirabaud sales trader Mark Taylor. "I am really only watching the price action and trying to make sense of it all."

Shares of GameStop have fallen more than 85% since their closing peak of $347.51 on Jan. 27, a wild ride that illustrated the power of retail investors trading on commission-free platforms such as Robinhood to influence financial markets.

Swaggystocks, which aggregates sentiment on shares talked about in the WallStreetBets forum, showed Tilray was the most upvoted, or highly touted, stock in the group.

Changes promised by some Democrats in Congress could help give U.S. cannabis companies access to more traditional methods of banking and open the sector to new, institutional investors.

However, some analysts argue valuations of the companies are becoming unjustifiable, especially for Canadian companies like Tilray, Aphria and Canopy Growth, which may gain very little from U.S. changes.

Canopy reported a reduction in adjusted losses in third-quarter results on Tuesday, but Stifel analysts said those fell short of justifying its current valuation.

Another brokerage, Canaccord Genuity, said the U.S. election-related enthusiasm had caused a "disproportionate amount of capital flow" into Canadian producers.

Shares of Tilray, which is being taken over by Aphria in a complicated reverse merger, are up more than 400% since the deal was announced in December following new agreements to supply its medical cannabis to European markets.

Aphria has gained 243% over the same period, as companies across the sector surged on a wave of legalization in major U.S. states and the Democratic party's promise to decriminalize the plant at the federal level.