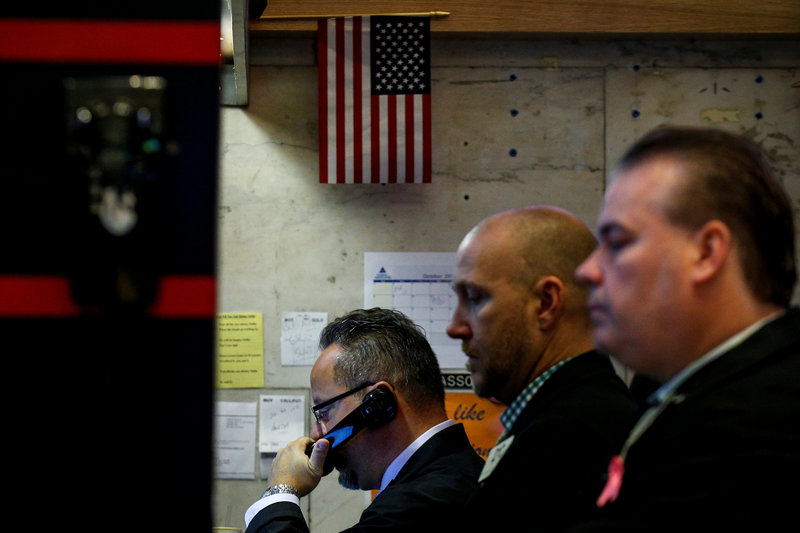 (Reuters) - Wall Street fell from record levels on Monday as gains in Microsoft and other technology stocks failed to offset a drop in General Electric and a slide in healthcare stocks.

The S&P healthcare index <.SPXHC> moved 0.67 percent lower, weighed by a 3.61-percent slide in Medtronic (NYSE: MDT) after the medical device maker warned that its quarterly profit would be impacted after Hurricane Maria hit its operations in Puerto Rico.

"Unlike the restaurant chains, movie chains and homebuilders and some of the discretionary stocks hurt by the hurricanes, I don't expect the banks to be affected by the non-recurring blips during the quarter," said Jake Dollarhide, chief executive officer of Longbow Asset Management in Tulsa, Oklahoma.

Overall, earnings at S&P 500 companies are expected to have increased 4.8 percent last quarter, according to Thomson Reuters data, down from the double-digit growth recorded in the first two quarters of this year.

Tesla (NASDAQ: TSLA) fell 3.91 percent after pushing back the unveiling of its big rig truck to mid-November.

Declining issues outnumbered advancing ones on the NYSE by a 1.21-to-1 ratio; on Nasdaq, a 1.49-to-1 ratio favored decliners.

About 4.4 billion shares changed hands on U.S. exchanges, well below the 6.1 billion daily average for the past 20 trading days, according to Thomson Reuters data.