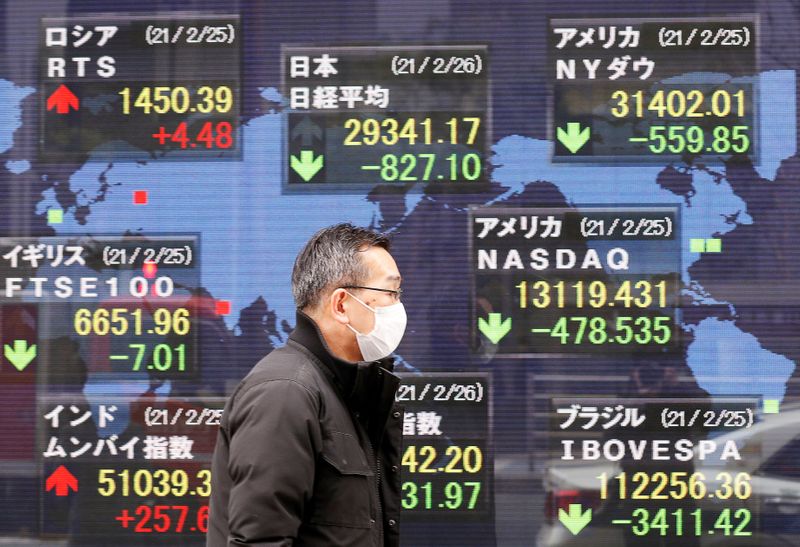 FILE PHOTO: A man walks past a stock quotation board at a brokerage in Tokyo, Japan February 26, 2021. REUTERS/Kim Kyung-Hoon/File Photo

NEW YORK (Reuters) - Wall Street lost ground, pulling back from the prior session's record closing highs and Treasury yields edged lower on Tuesday as investors trained their focus on the approaching earnings season and the Federal Reserve's economic outlook.

All three major U.S. stock indexes closed in the red, led by the blue-chip Dow, which notched an all-time closing high on Monday.

"It's a normal follow-on to a strong day," said Matthew Keator, managing partner in the Keator Group, a wealth management firm in Lenox, Massachusetts. "The market is catching its breath from the job number and a strong day like yesterday, which reflected a high in the market."

The market often takes a breath as earnings season draws near, a first-quarter results will be significant, marking the anniversary of the coronavirus outbreak.

"How the market digests those first year-over-year comps remains to be seen," Keator added. "Generally speaking, it's understandable to have a positive outlook based on a significant amount of pent-up demand."

The U.S. Federal Reserve is expected to release the minutes from its last monetary policy meeting on Wednesday and market participants will parse it for any changes to the central bank's economic outlook.

"The market is going to be dissecting (Federal Reserve Chairman Jerome) Powellâs comments to see if there's anything embedded in them that might reflect a change in policy," Keator said.

European stocks closed at a record high, having recovered all pandemic-related losses as investors bet on a speedy global economic recovery.

U.S. Treasury yields dipped, with 5-year notes leading the decline, on investor views that market pricing based on an earlier-than-expected tightening by the Fed was too aggressive.

The dollar slipped to a two-week low against a basket of world currencies, with traders taking advantage of its strong March performance as dropping Treasury yields pressured the greenback.

Crude oil prices partially rebounded from the previous session's losses, lifted by strong data from the United States and China.

Gold prices touched their highest level in more than a week, benefiting from the soft dollar and lower Treasury yields.