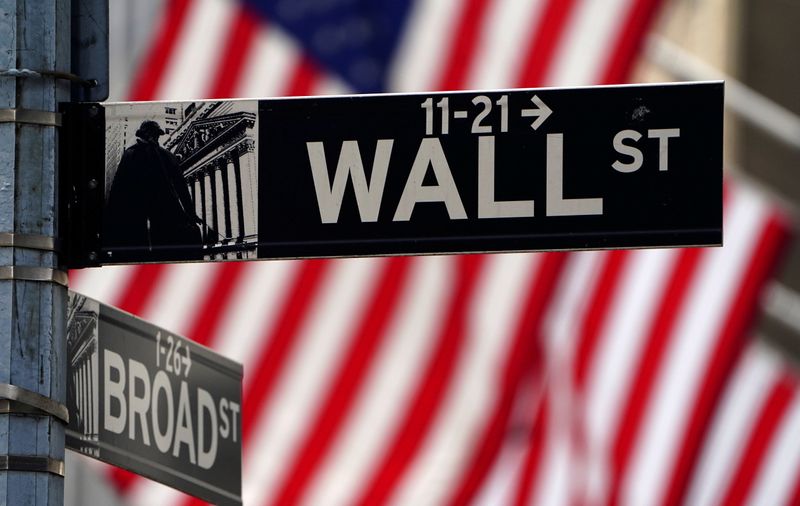 (Reuters) - Wall Street's major averages fell more than 1% on Wednesday after a morning rally faded as investor angst about the latest coronavirus variant soared with the first U.S. case confirmation while the market also digested Fed comments on inflation.

After having advanced as much as 1.9% by late morning, the S&P 500 gave up all its gains in the afternoon along with the Dow and Nasdaq, which fell the most on the day. All three indexes breached key technical levels during the session.

Late in the day, the U.S. Centers for Disease Control said the country had detected its first case of the Omicron variant, which had infected a person who came from South Africa, where the variant was initially discovered.

Earlier on Wednesday, Federal Reserve Chair Jerome Powell said policymakers needed to be ready to respond to the possibility inflation may not recede in the second half of next year as expected.

Wall Street had already tumbled on Tuesday after Powell had surprised the market by signaling that the central bank would consider accelerating the withdrawal of its bond buying program at its December meeting amid a surge in inflation.

"The market's grappling with the twin concerns of the Omicron variant, which may or may not be able to evade the vaccine, and a more hawkish Powell than expected," said Chris Zaccarelli the chief investment officer at Independent Advisor Alliance in Charlotte, North Carolina.

Wall Street had tumbled sharply on Friday when investors first heard of the Omicron variant with health officials saying they were unsure how transmissible or dangerous the variant is and how much protection existing vaccines provide.

On Monday, the market rebounded sharply as investors looked for bargains after the sell-off, only to fall again on Tuesday following the Powell comments. [.N/C]

"We tried to buy the dip again (on Wednesday) but news that Omicron is here already has taken some of the wind out of the sails of the bulls," said Zaccarelli.

While all of the 11 major S&P sectors were gaining into the early afternoon, all but one sector ended the day in the red. The communications services sector was the biggest loser with a 1.99% drop and consumer discretionary was not far behind with a 1.86% dip.

The sole advancing sector was utilities, a more defensive sector which tends to draw interest when investors are fleeing from riskier bets. The next best performers on the day were also defensive sectors with the healthcare ending down 0.2% and consumer staples falling 0.4%.

The CBOE market volatility index, often referred to as Wall Street's fear gauge, closed up 14.5 points at 31.12 after earlier rising to 32.61, its highest level since February.

The economically sensitive Russell 2000 index of small cap companies did an almost complete about-face, closing down 2.3% after rising as much as 2.5% at its late morning peak.

The World Health Organization said it expected to have more information on the transmissibility of the Omicron variant within days, and that the agency believes the existing COVID-19 vaccines will work against the variant.

Lauren Goodwin, economist and portfolio strategist at New York Life Investments, said it was not surprising to see volatility as investors digest uncertainties including the lack of information on Omicron and the latest signals from the Fed.

However Goodwin also pointed at Wednesday's positive economic data, which was "reminding investors that the economic and corporate backdrop for this market is really strong."

U.S. manufacturing activity picked up in November amid strong demand for goods.

Salesforce.com Inc forecast current-quarter profit below estimates as it faces stiff competition from rivals including Microsoft, sending its shares down 11.7%.[nL4N2SL4DM]

Declining issues outnumbered advancing ones on the NYSE by a 2.26-to-1 ratio; on Nasdaq, a 2.96-to-1 ratio favored decliners.

Trading volume was elevated with 14.2 billion shares changing hands on U.S. exchanges, compared with the 11.3 billion average for the last 20 sessions.