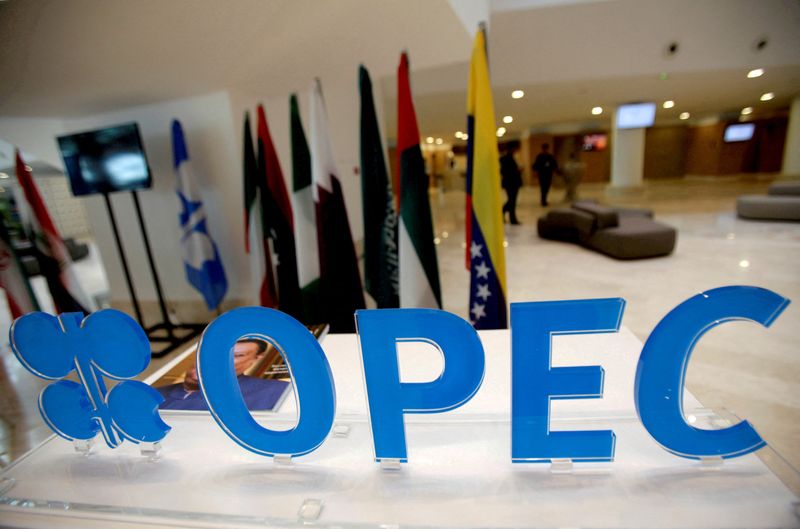 FILE PHOTO: The OPEC logo pictured ahead of an informal meeting between members of the Organization of the Petroleum Exporting Countries (OPEC) in Algiers, Algeria, September 28, 2016. REUTERS/Ramzi Boudina

WASHINGTON (Reuters) -U.S. stocks rose sharply on the first day of trading of the fourth quarter as volatile swings continued to dominate markets, while the prospect of reduced supply pushed oil up nearly $4 a barrel.

Wall Street closed the first trading day of the week higher, after a September selloff not seen in two decades. Economic data suggesting a manufacturing slowdown boosted hopes the Federal Reserve could step back from its rate-hiking spree sooner.

Crude prices jumped after the Organization of the Petroleum Exporting Countries and its allies, a group known as OPEC+, said it would consider reducing output. Worries about supply helped push Brent crude up 4.3% to $88.79 a barrel. U.S. crude rose 4.9% to $83.35 a barrel.

New data showing U.S. manufacturing activity grew at its slowest pace in nearly 2-1/2 years injected some life into stocks on the thought that the economy slowing could affect how long the Federal Reserve will continue hiking interest rates.

"Traders are taking the view that bad news for the economy is good news for the stock market," said David Madden, market analyst at Equiti Capital. "High inflation is the reason why the Fed is tightening monetary policy and considering the fall in prices paid, we could be witnessing further signs that we are beyond peak inflation."

Investors will have several new economic reports to process this week, highlighted by the monthly U.S. jobs report due Friday. Signs of softening in that data could show rate hikes having their intended effect, although Fed officials maintain they will not change course until price increases are under control.

Federal Reserve Bank of New York President John Williams indicated on Monday the Fed will keep up its rate hikes, saying that while there have been nascent signs of cooling inflation, underlying price pressures remain too high.

"Tighter monetary policy has begun to cool demand and reduce inflationary pressures, but our job is not yet done," said Williams.

Sterling jumped against the dollar Monday on Britain's tax cut U-turn, reversing a brutal drop and surging 1.38% in afternoon trading. The safe-haven dollar also took a broader step back, with the dollar index, which tracks the greenback versus a basket of six currencies, falling 0.4%.

Dips in Treasury yields and the dollar also helped gold prices climb, with spot gold prices rising 2.37% to $1,698.94 an ounce.