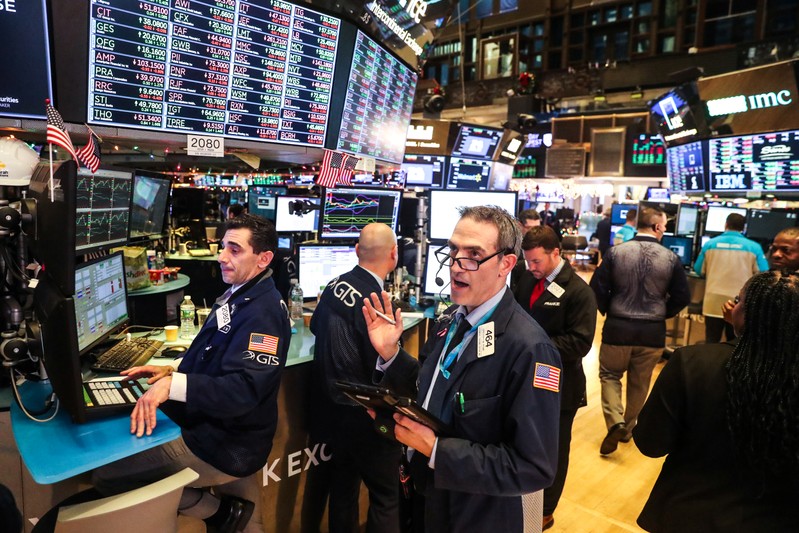 NEW YORK (Reuters) - Wall Street edged higher on Wednesday after stumbling out of the starting gate on the first trading day of 2019, while fears of a global economic slowdown were exacerbated after Apple cut its holiday-quarter revenue forecast.

Apple (NASDAQ: AAPL) dropped 8 percent in extended trading late in the day after the iPhone maker slashed its outlook for the December quarter, blaming weak demand in China.

"To see Apple's sales drop off this much says something about the Chinese economy," said Tim Ghriskey, chief investment strategist at Inverness Counsel in New York. "Any company that does business in China will feel the impact of this."

Stocks had started the session lower after separate reports showed a deceleration in factory activity in China and the euro zone, indicating the ongoing trade dispute between the United States and China was taking a toll on global manufacturing.

Energy <.SPNY> stocks led the S&P 500's advance and the sector was the index's biggest percentage gainer, buoyed by a 2.4 percent jump in crude prices. The group was the worst performing S&P sector in 2018.

Gains were offset by healthcare <.SPXHC> and so-called defensive sectors, such as real estate <.SPLRCR>, utilities <.SPLRCU> and consumer staples <.SPLRCS>. Healthcare companies provided the biggest drag on the S&P 500 and the Dow.

Of the 11 major sectors in the S&P 500, seven closed in positive territory.

Banks got a boost from Barclays, as the broker wrote in a research note that the sector could outperform the S&P this year. The Dow Jones Industrial average was led higher with gains from Goldman Sachs (NYSE: GS) and JPMorgan (NYSE: JPM).

General Electric Co (NYSE: GE) jumped 6.3 percent in heavy trading as bargain hunters bought the stock in the wake of its over 50-percent plunge in 2018.

Advancing issues outnumbered declining ones on the NYSE by a 2.10-to-1 ratio; on Nasdaq, a 2.42-to-1 ratio favored advancers.

Volume on U.S. exchanges was 7.80 billion shares, compared to the 9.18 billion average for the full session over the last 20 trading days.