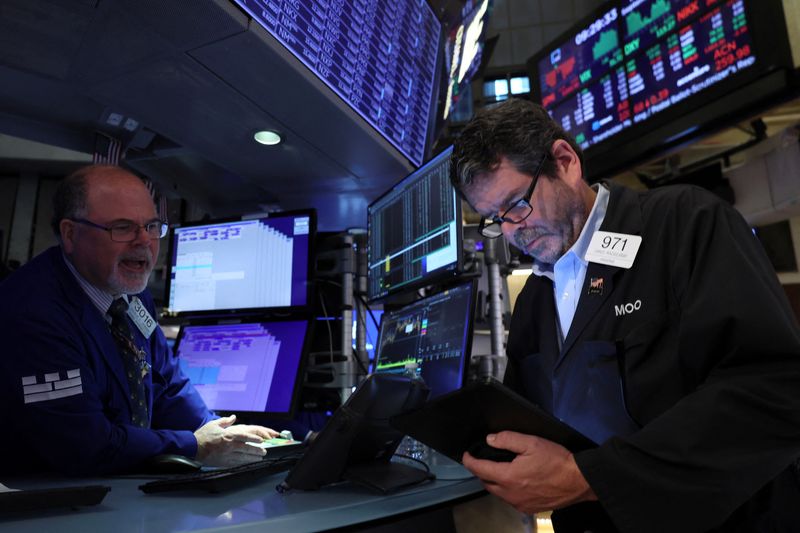 (Reuters) - Wall Street sank deeper into a bear market on Tuesday, with the S&P 500 recording its lowest close in almost two-years as Federal Reserve policymakers showed an appetite for more interest rate hikes, even at the risk of throwing the economy into a downturn.

The benchmark S&P 500 is down about 24% from its record high close on Jan. 3. Last week, the Fed signaled that high rates could last through 2023, and the index erased the last of its gains from a summer rally and recorded its lowest close since November 2020.

The S&P 500 has declined for six straight sessions, its longest losing streak since February 2020.

Speaking on Tuesday, St. Louis Fed President James Bullard made a case for more rate hikes, while Chicago Fed President Charles Evans said the central bank will need to raise rates by at least another percentage point this year.

"It's disappointing, but it's not a surprise," said Robert Pavlik, senior portfolio manager at Dakota Wealth in Fairfield, Connecticut. "People are concerned about the Federal Reserve, the direction of interest rates, the health of the economy."

Analysts at Wells Fargo now see the U.S. central bank taking its target range for the Fed funds rate to between 4.75% and 5.00% by the first quarter of 2023.

Seven of 11 S&P 500 sector indexes fell, with utilities and consumer staples each down about 1.7% and leading declines.

The energy sector index rallied 1.2% after Sweden launched a probe into possible sabotage after major leaks in two Russian pipelines that spewed gas into the Baltic Sea.

Traders exchanged over $17 billion worth of Tesla shares, more than any other stock.

The benchmark U.S. 10-year Treasury yield touched its highest level in more than 12 years amid the hawkish comments from Fed officials. [US/]

Concerns about corporate profits taking a hit from soaring prices and a weaker economy have also roiled Wall Street in the past two weeks.

Volume on U.S. exchanges was 11.7 billion shares, compared with an 11.3 billion average for the full session over the last 20 trading days.

Declining issues outnumbered advancing ones on the NYSE by a 1.25-to-1 ratio; on Nasdaq, a 1.03-to-1 ratio favored advancers.