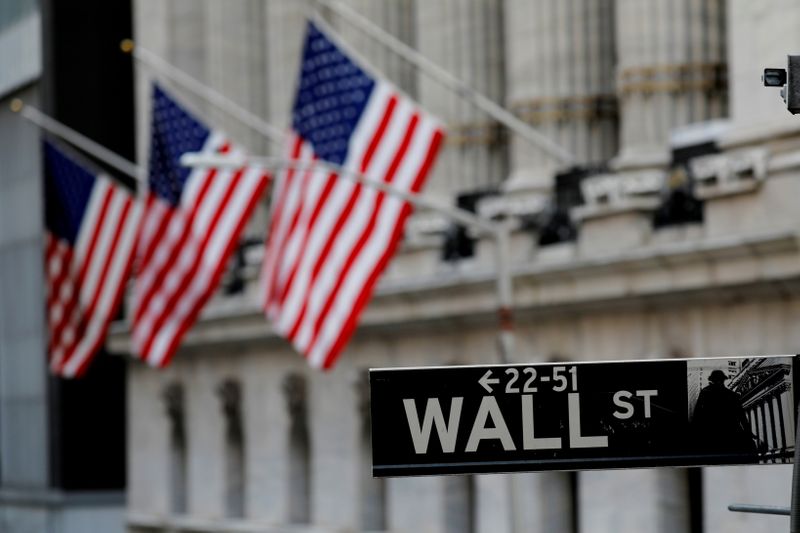 (Reuters) - The S&P 500 and Dow Jones industrial average ended lower on Monday, with investors waiting for cues from the upcoming corporate earnings season and a key inflation report later this week.

The indexes had closed at record highs on Friday, after rallying for days on a pullback in the benchmark 10-year bond yield from 14-month highs.

With U.S. consumer price data for March due to be published Tuesday, this could drive Treasury yields higher. Big Wall Street names are due to kick off earnings season on Wednesday, giving new catalysts to buy or sell stocks in a record-high market.

"Investors are now going to pay close attention to earnings season, because this is the time where they are expecting guidance from companies, where valuations start to matter again," said Ed Moya, senior market analyst at OANDA.

"There's this nervousness that we're going to see that we can't just buy everything, as that was the trade for the last few months."

Federal Reserve Chair Jerome Powell said on Sunday the U.S. economy was at an "inflection point" with expectations for faster growth in the months ahead, but he warned that a hasty reopening could lead to a continued increase in coronavirus cases.

S&P 500 earnings are expected to have jumped 25% in the quarter from a year ago, according to Refinitiv IBES data. That would be the biggest quarterly gain since 2018, when tax cuts under former President Donald Trump boosted profit growth.

Banks are among the first to report earnings for the opening quarter of 2021, with Goldman Sachs, JPMorgan and Wells Fargo due on Wednesday.

The financials index and consumer discretionary sector both hit record highs on Monday, on confidence in both areas as the U.S. economy reopens.

"The optimism is improving now that these banks are going to return to normal, with buybacks and dividends, and because of the outlook for Treasury yields, they are going to have a better outlook going forward," said OANDA's Moya.

Among the 11 major S&P 500 sector indexes, communication services and energy shares were the steepest decliners.

Tesla Inc rose 3.7% after Canaccord Genuity upgraded the electric-car maker's shares to "buy," saying the company could become "the brand" in energy storage.

In one of the year's quietest sessions, volume on U.S. exchanges was 9.0 billion shares, versus the 11.6 billion average for the last 20 trading days.

Declining issues outnumbered advancing ones on the NYSE by a 1.08-to-1 ratio; on Nasdaq, a 1.84-to-1 ratio favored decliners.