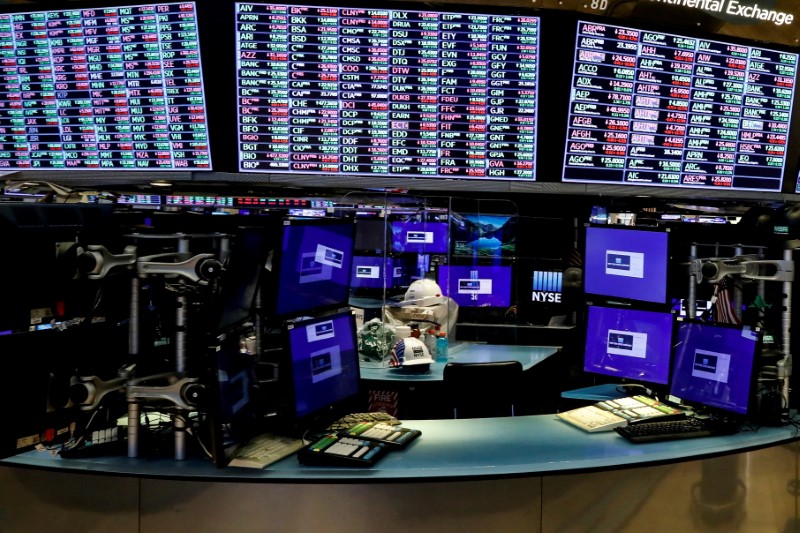 FILE PHOTO: Dividers are seen inside a trading post on the trading floor as preparations are made for the return to trading at the New York Stock Exchange (NYSE), May 22, 2020. REUTERS/Brendan McDermid

By Noel Randewich and Medha Singh

(Reuters) - The S&P 500 ended the week at record high on Friday, lifted by Nike and several banks, while weaker-than-expected inflation data eased worries about a sudden tapering in stimulus by the Federal Reserve.

Nike Inc surged 15.5% to an all-time high after the sneaker maker forecast fiscal full-year sales ahead of Wall Street estimates, helping the Dow lead among the three main indexes.

Bank of America climbed 1.9% and Wells Fargo rallied 2.7% after the Fed announced big banks have cleared stress test and will no longer face pandemic-related restrictions on buying back stock and paying dividends.

The S&P 500 financials index rose 1.3% and was the top performers among 11 sector indexes.

"Today is a bit of profit-taking in tech and a reallocation into the banks after the results of the stress tests," said Dennis Dick, a proprietary trader at Bright Trading LLC, adding he expects banks to soon announce increased dividends.

A bipartisan Senate deal on infrastructure spending embraced by U.S. President Joe Biden on Thursday continued to lift stocks, with the materials and industrials indexes increasing and helping the S&P 500 outperform the Nasdaq.

"The positive news from the infrastructure package favors the S&P 500 more than then Nasdaq. The Nasdaq does not pour cement into roads and put steel in bridges. That's the S&P 500," said Jake Dollarhide, chief executive officer of Longbow Asset Management in Tulsa, Oklahoma.

The latest personal consumption expenditures (PCE) data showed a measure of underlying inflation rose less than expected in May. Core PCE rose 3.4% year-over-year as expected, above the Fed's 2% flexible target.

With the FTSE Russell reconstituting its indexes following a wild trading year marked by the pandemic and a "meme" stocks, volume on U.S. exchanges surged to 15.1 billion shares, versus the 11.2 billion average over the last 20 trading days.

CarMax Inc jumped 6.7% after the used-car retailer topped Wall Street estimates for quarterly revenue, helped by strong demand as more people opted for personal vehicles over public transport due to the COVID-19 pandemic.

Advancing issues outnumbered declining ones on the NYSE by a 1.29-to-1 ratio; on Nasdaq, a 1.22-to-1 ratio favored advancers.