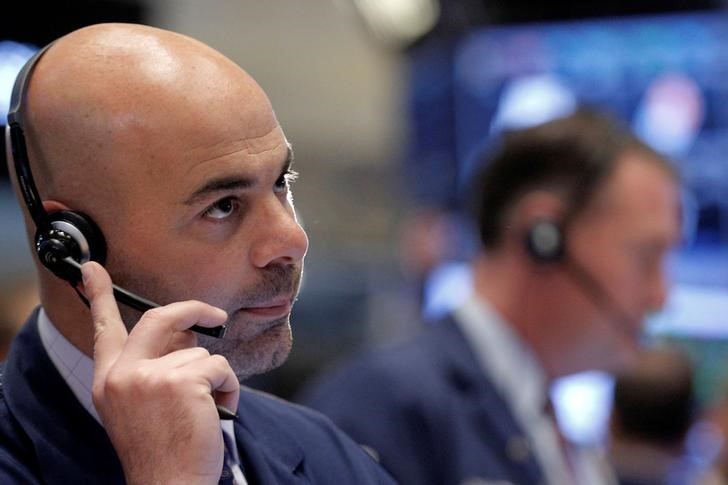 Traders work on the floor of the New York Stock Exchange (NYSE) in New York City, U.S., May 6, 2016. REUTERS/Brendan McDermid

(Reuters) - Wall Street ended mixed on Monday after a rally in Allergan Plc and other healthcare companies offset a decline in energy shares.

A bigger-than-expected drop in China's imports and exports in April pointed to weak demand in the world's second-biggest economy and weighed on materials stocks. Caterpillar (NYSE: CAT) dropped 3.52 percent, weighing the most on the Dow industrials.

Investors remain cautious about corporate earnings. With first-quarter reports almost all in, earnings at S&P 500 companies, on average, fell 5.5 percent while revenue was down 1.9 percent, according to Thomson Reuters I/B/E/S.

"I would give this earnings season a C or C-. While most of the companies were able to step over a greatly reduced bar of expectations, overall sales growth remains disappointing," said Alan Gayle, senior investment strategist at RidgeWorth Investments in Atlanta, which has $50 billion in assets under management.

During the session, Krispy Kreme Doughnuts Inc (NYSE: KKD) jumped 24.32 percent to after agreeing to be taken private for $1.35 billion.

That made investors hungry for other restaurant stocks, including Kona Grill (NASDAQ: KONA), up 8.18 percent, and Pollo Loco (NASDAQ: LOCO), up 5.02 percent.

About 6.8 billion shares changed hands on U.S. exchanges, below the 7.2 billion daily average for the past 20 trading days, according to Thomson Reuters data.