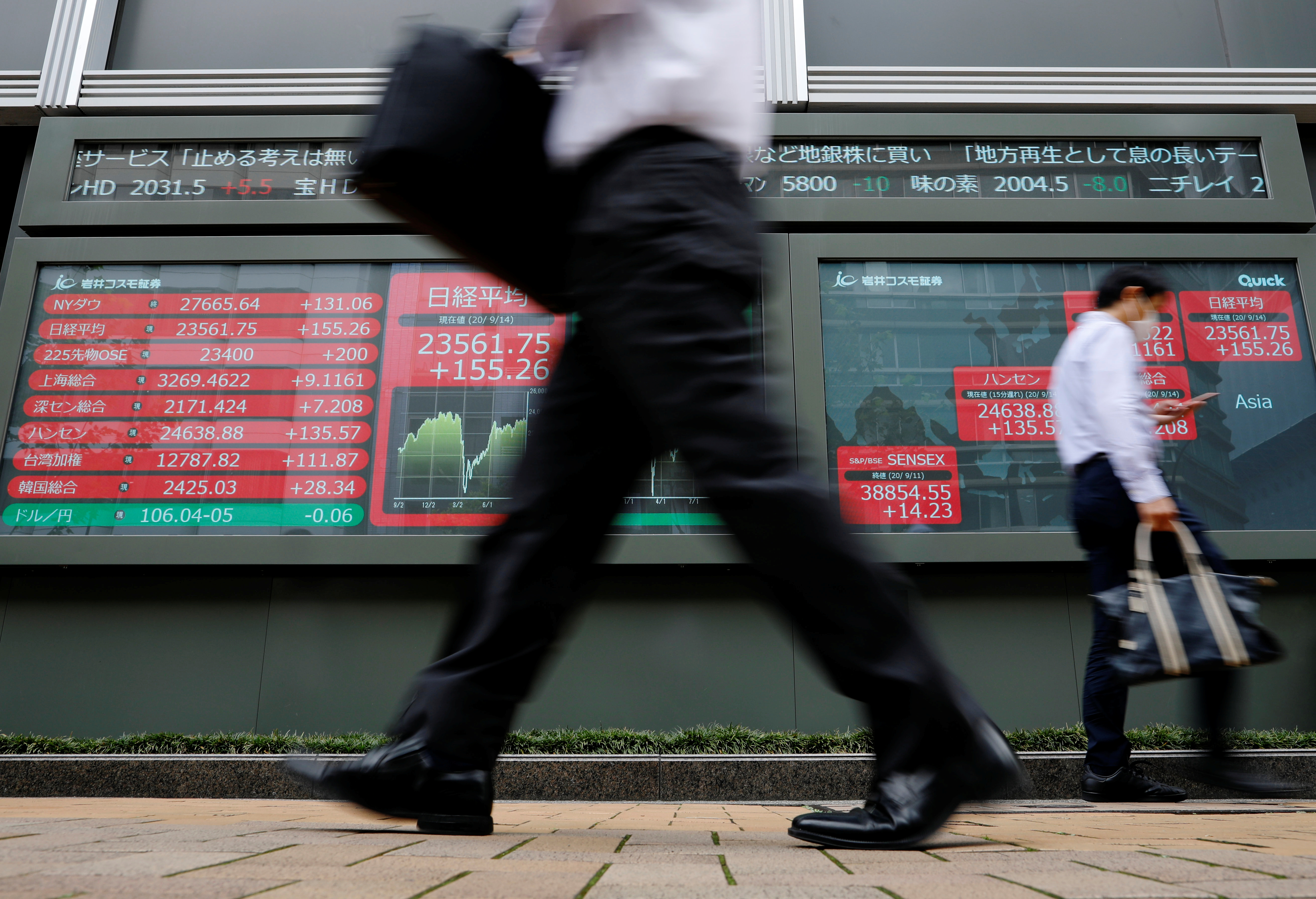 FILE PHOTO: Passersby wearing protective masks walk past an electronic board showing Japan's Nikkei average, the exchange rate between Japanese yen against the U.S. dollar and other world's benchmarks outside a brokerage, amid the coronavirus disease (CO

At the conclusion of its two-day policy meeting, the Fed disclosed that 11 out of 18 officials were projecting at least two quarter-point interest rate increases in 2023, as Fed Chairman Jerome Powell insisted at a press conference that the U.S. economy is well positioned coming out of the pandemic. The Fed said monetary support will remain until "substantial further progress" is seen on employment and inflation.

"The central case growth and inflation expectations for the next couple of years have not changed by much since March, but there is an explicit recognition that the vaccination program has reduced the risks to the economy from the health crisis," said Brian Coulton, chief economist at Fitch Ratings.

Investors had been fixated on the new Fed statement all week, as it was the first policy update from the central bank since fresh economic data showed job growth slowing and inflation on the rise. New projections from Fed officials showed an uptick in projection inflation in the near term, but the Fed did not indicate any significant rethinking of its approach, said analysts.

"Clearly expectations for the Fed to flinch were grossly overblownâa unanimous vote clearly shows theyâre all on the same page with the current state of the economy, and importantly theyâve essentially doubled down on their view that inflation is transitory, albeit at a higher rate than last time they met," said Mike Loewengart, managing director of investment strategy for E*Trade Financial. "But what happens next year becomes more of a question mark."

Markets dipped immediately following the statement, but recovered from session lows as investors digested the news.

The prospect of higher rates was felt in Treasury bonds and the dollar, which both jumped following the Fed statement.

The five-year yield had its biggest one-day move since February, climbing to its highest level since April 6 at 0.913%.

The dollar index =USD, which tracks the greenback against six major currencies, was up 0.63% at 91.103, its highest since May 6.

Oil prices posted gains for the fifth straight day on an anticipated surge in demand alongside falling crude inventories. Brent crude gained 40 cents, or 0.5%, to hit $74.39 a barrel, reaching its highest since April 2019, and running its gains to five straight days. U.S. crude rose 3 cents to $72.15, after reaching $72.99, highest since October 2018.