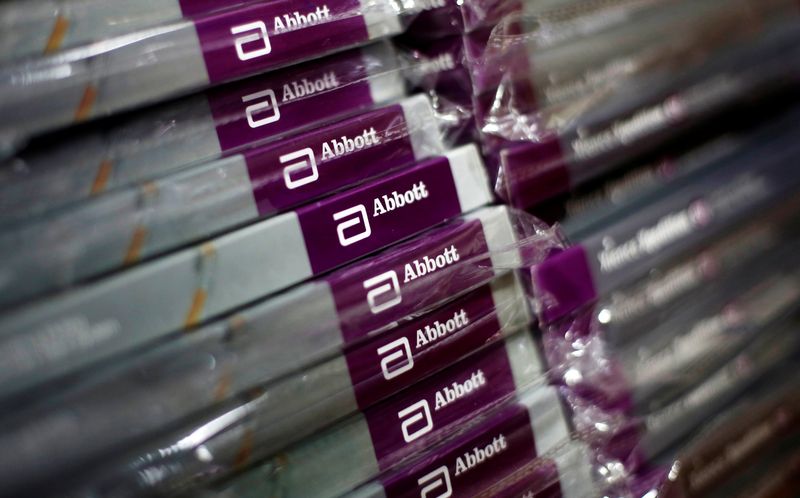 FILE PHOTO: Boxes of Abbott's heart stents are pictured inside a store at a hospital in New Delhi, India, April 27, 2018.

(Reuters) -Abbott Laboratories will pay $160 million to resolve claims that two of its units submitted false claims to Medicare by providing kickbacks to diabetes patients, including "free" or "no cost" glucose monitors, the U.S. Department of Justice said.

Monday's settlement resolves claims that Arriva Medical LLC - once the largest Medicare mail-order diabetes testing supplier - and its parent Alere Inc violated the federal False Claims Act from 2009 to 2016 by diverting Medicare funding from where it was needed.

Arriva was also accused of systematically charging Medicare, a U.S. government health plan, for glucometers given to ineligible patients, and submitting claims for 211 patients who had been dead at least two weeks.

In a statement, Abbott did not comment on the settlement, but said Alere disclosed the matter in its financial filings. The defendants did not admit liability.

Gregory Goodman, a whistleblower and former $15-an-hour employee at an Arriva call center in Antioch, Tennessee, will receive $28.5 million from the settlement.

"Doing anything that defrauds the government or the Medicare program, it's fellow Americans who end up paying for it," Goodman, who turns 60 this week and recently retired from a career in sales, said in an interview. "The decision to move forward was quite simple."

Goodman's lawyer, Jerry Martin, a former U.S. attorney in Tennessee, said in an interview: "It shows you the power of the False Claims Act and how it can be harnessed to get big results."

The False Claims Act lets whistleblowers sue on behalf of the federal government, and share in recoveries.