You Have To See What Merrill's John Thain Spent On His Office...Wow! 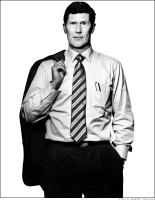 In Charlie Gasparino's Daily Beast column, Charlie reveals how Merrill Lynchâs CEO, (now owned by Bank of America (NYSE: BAC)), spent over $1 million to redecorate his office last year. Are you kidding me?

In early 2008, just as Merrill's CEO John Thain was preparing to cut expenses, eliminate thousands of jobs and exit businesses to save the dying Merrill Lynch, Thain was also spending embarrassing money on the redesign of his office.

John Thain spent $1.22 million of Merrill's money to refurbish his office. Thain's largest expense was the hiring of celebrity designer Michael Smith for $800,000. This is the same guy who is currently redesigning the White House for the Obama family for only $100,000. Thain had Merrill pay that designer $700,000 more for the redesign of only his office. Again, are you kidding me?


Finally, in addition to the above ridiculous numbers, documents show Merrill paid $230,000 for Thain's personal driver for one yearâs work, which included the driver's $85,000 salary and bonus of $18,000, and another $128,000 in over-time pay. Drivers of top executives are often paid about half that amount.

Subscribe to EasyStockAlerts.com & Get real-time e-mail alerts when news hits your stocks!