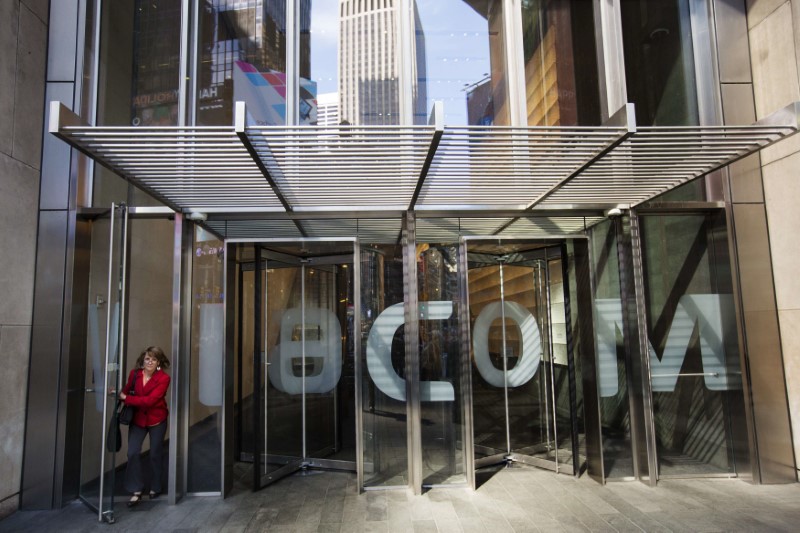 By Jessica Toonkel and Greg Roumeliotis

National Amusements is the controlling shareholder of both media companies, which separated from each other 10 years ago.

A merger would give Viacom, whose networks include Comedy Central, Nickelodeon and MTV, a seasoned media executive at the helm in CBS CEO Leslie Moonves at a time when its TV ratings and ad revenue are in decline, many investors believe.

The possible benefits for CBS are less clear, beyond the company gaining scale, which could help with negotiations with cable and satellite distributors. CBS's ratings and ad revenue have been strong over the past few years and Moonves has resisted the idea of a recombination, other people familiar with the situation have said.

Investors tentatively welcomed the prospect of a deal, if only to end the uncertainty that has hovered over the companies for the past two years as the ailing 93-year-old Redstone has become less involved in their operations.

âWe would like to see CBS continue on its path of success and bring Viacom along with the ride,â said Michael Cuggino, president at San Francisco-based Permanent Portfolio Family of Funds, which owns voting shares of CBS and Viacom. He said his enthusiasm for a deal would depend on the details.

A merger could save $400 million in costs between the two companies and give them greater clout in the consolidating world of television, according to Michael Nathanson, senior analyst at MoffettNathanson Research.

A combination of CBS and Viacom would be the latest example of a deal between two companies with high-profile owners in common.

Elon Musk is the largest shareholder in both Tesla Motors Inc (NASDAQ: TSLA) and SolarCity Corp (NASDAQ: SCTY), which announced a deal in August. A month earlier, Larry Ellison's Oracle Corp (NYSE: ORCL) said it would buy NetSuite Inc (NYSE: N), 40 percent of whose shares are controlled by Ellison.

In both those cases the companies formed special board committees to explore all transactions available to them before agreeing to a deal.

National Amusements may contact CBS and Viacom as early as this week to ask them to form such independent board committees, one of the sources said.

The sources asked not to be identified because the deliberations are confidential. Representatives for National Amusements, Viacom and CBS declined to comment.

National Amusements, the privately held movie theater company owned by Redstone and his daughter Shari Redstone, own 80 percent of the voting shares of Viacom and CBS.

Viacom was spun off from CBS in 2006, but Shari Redstone has been in favor of recombining the two under the leadership of Moonves, sources have previously told Reuters.

Industry speculation that the two might tie up has increased over the past few weeks, after the Redstones prevailed over a power struggle that resulted in the departure of Viacom Chief Executive Officer Philippe Dauman.

However, Moonves has previously indicated he is not warm to the idea. "We are never going to do something that is bad for CBS shareholders," he told investors at a Bank of America Merrill Lynch investor conference earlier this month, adding that the two companies were not "in active discussions."

Last week, Viacom, which has more than $12 billion in debt, slashed its dividend by half to 20 cents per share and said it expects a fourth-quarter adjusted profit of 65 to 70 cents per share. Analysts on average were expecting 89 cents per share, according to Thomson Reuters I/B/E/S.

Viacom, which also owns Paramount Pictures, announced last week that its interim CEO, longtime Viacom executive Tom Dooley, would be leaving in November, opening a gap at the top of the company as its board navigates the way forward.

Merging Viacom back into CBS is the most logical solution, particularly for Sumner Redstone, who is known to be very attached to pieces of Viacom, particularly its Paramount studios, according to Mario Gabelli, whose firm is the second-largest owner of voting shares of both Viacom and CBS after Redstone.

Gabelli would not say whether he favors a deal. "It's always a question for my clients as to 'What do I get?," he said.

Despite Viacom's recent issues, there is still a lot of value in the company, he said.

"It's a fixer-upper," said Gabelli. "It's like prime real estate on a beach overlooking a bluff in East Hampton, but the house sucks."