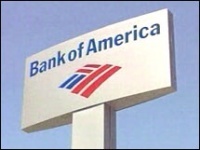 Shares of Bank of America (NYSE: BAC) took a slight dip lower on the news that WikiLeaks founder Julian Assange is out on bail.

Share are trading up 0.4 percent, versus a 1 percent move higher before the Assange headlines. It is unclear if the news caused the dip in the stock.

In a recent interview with Forbes, Assange said WikiLeak's next target will be a major American bank. Assange said the information, "could take down a bank or two."

The data dump coming early next year and Bank of America is the rumored target.