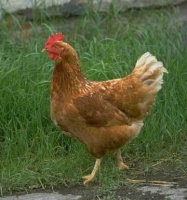 With prices of corn and soybean meal escalating over the last year, and elevated levels expected to stick around for a while, it could put a damper in Sanderson's margins and profits. Further, demand for chicken from key areas like restaurants and food-service industry players are at all-time lows. The two sectors represent about two-thirds of Sanderson's profit pool.

Since increasing chicken production stemming from delicious profit years in 2009 and 2010, producers have only now begun to cut back heading into fall, meaning there's a chicken glut heading into the slower poultry-consuming winter months. Cold-storage inventories are up about 13 percent, or 100 million pounds, over the same period last year.

Barron's believes that the "perfect storm" will continue into 2012. Three closely-held chicken processors have already declared bankruptcy in 2011, and more cuts in the industry are expected moving forward.

Sanderson Farms is the most exposed pure-play company to the sector, meaning investors may have to put up with some pullback before shares takeoff again. Unlike peers Tyson Foods (NYSE: TSN) and Pilgrim's Pride (NYSE: PPC), Sanderson accounts for 10 percent of the chicken market.

Sanderson CFO Mike Cockrell says conditions are difficult, and a 5 to 6 percent cut in production targeted by the industry may not be enough to return Sanderson to profitability. He says conditions mimic 2008, when the industry experienced one of the worst downturns ever on soaring corn prices and the fianncial meltdown that put many plans for corporations and individuals on the back burner.

With a sterling balance sheet, Sanderson should be able to weather any turmoil in the industry, though some analyst firms are expecting a drop in share prices by as much as 25 percent or more over the next 12 months. One analyst from Morgan Stanley believes Sanderson's production would have to fall by 9 percent, and chicken prices need to increase by nearly 30 percent to an average of 79 cents per pound in 2012.

Sanderson estimated in May that prices in 2012 needed to increase 15 percent for margins to come back in-line with those of 2010. Prices have fallen further over the last three-months since the announcement.

With it's upcoming earnings release on August 25, Sanderson is expected to report a loss of 68 cents per share on revenue of $521.4 million. The number would be a 180-degree shift from profit of $1.55 per share reported in the same period last year.

With the USDA agreeing to buy $40 million on top of the $100 million typically spent on chicken to supply the national school-lunch program, commodity prices rising, and demand waning, investors would be wise to evaluate their positions in Sanderson.

Sanderson shares are down just over 1 percent early Monday.