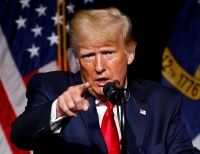 Trump Media & Technology Group announced it has agreed to merge with the special purpose acquisition company Digital World Acquisition Corp. (NASDAQ: DWAC) in a deal worth up to $1.7 billion.

TMTG is valued at $875 million initially, with an additional $825 million available in additional shares. The company will raise $293 million from the DWACâs cash in trust.

Trump Media aims to create a ârival to the liberal media consortiumâ and fight back against the Big Tech. The plan also included the launching of a social network called âTRUTH Social.â

âI created TRUTH Social and TMTG to stand up to the tyranny of Big Tech. We live in a world where the Taliban has a huge presence on Twitter, yet your favorite American President has been silenced. This is unacceptable. I am excited to send out my first TRUTH on TRUTH Social very soon. TMTG was founded with a mission to give a voice to all. I'm excited to soon begin sharing my thoughts on TRUTH Social and to fight back against Big Tech. Everyone asks me why doesnât someone stand up to Big Tech? Well, we will be soon!,â President Trump said in a press release.

"Digital World was formed to create public shareholder value and we believe that TMTG is one of the most promising business combination partners to fulfill that purpose,â added Patrick F. Orlando, Chairman/CEO of DWAC.