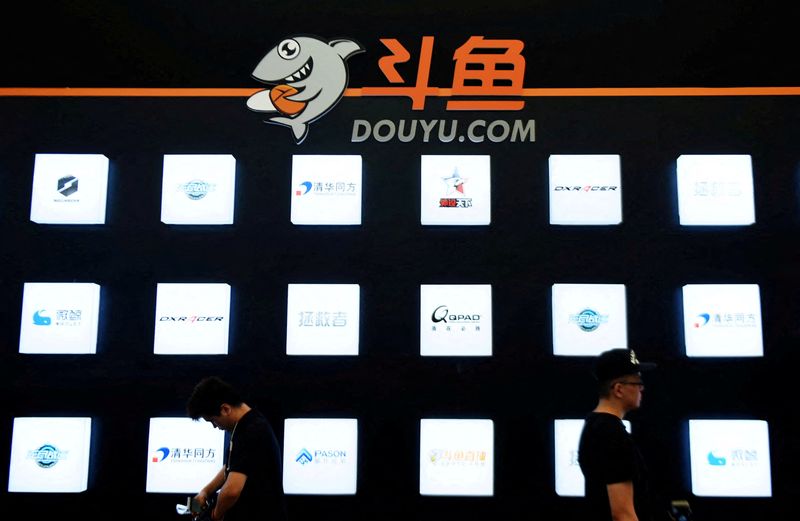 Tencent, the biggest shareholder in Nasdaq-listed DouYu with a 37% stake, wants to team up with at least one private equity firm for the deal and is currently talking to investment banks, they said.

It is aiming to complete the deal this year, said one of the people.

Shares in DouYu, one of Tencent's main platforms for game marketing and China's No. 2 videogame streaming site, surged as much as 17.6% on the news, closing 14% higher on Thursday.

The company has been debating its business strategy after Tencent's plans to merge it with bigger rival Huya Inc were blocked by regulators in July last year on antitrust grounds.

There have been differences among DouYu executives over whether to stick with game livestreaming as its core business or shift towards more profitable entertainment livestreaming, said the other person.

That tension has not abated even after DouYu co-founder and co-CEO Zhang Wenming, who had favoured diversifying revenue streams, resigned last month, the person added. DouYu has said Zhang's departure was due to personal reasons. Co-founder Chen Shaojie now runs the company.

The take-private plans reflect Tencent's desire to have a firm grip on its core gaming affiliates at a time when it faces a raft of regulatory issues, said the people, who were not authorised to speak on the matter and declined to be identified.

A 60% slide in DouYu's stock price since July, giving it a market value of $717 million on Wednesday, has also meant it is attractively priced for a take-private deal, they added.

Tencent and DouYu declined to comment. Zhang and Chen did not immediately respond to a request for comment made via DouYu.

Tencent, owner of hit games "Honor of Kings" and "PUBG Mobile", has like other Chinese internet firms been grappling with a regulatory crackdown on the sector and in the third quarter posted revenue growth of just 13% https://www.reuters.com/business/media-telecom/tencent-reports-3-jump-third-quarter-profit-beating-expectations-2021-11-10 -its slowest since it went public in 2004.

In addition to the blocking of the DouYu-Huya deal, it has also had to contend with efforts by authorities to rein in gaming by minors, while curbs on other industries have also dampened advertising appetite.

At the same time, competition is growing both at home and globally.

ByteDance, owner of Douyin, the domestic version of Tiktok, and which also has a games unit, has made sizeable inroads into the video games business. Microsoft Corp last week said it would acquire https://www.reuters.com/technology/microsoft-buy-activision-blizzard-deal-687-billion-2022-01-18 "Call of Duty" maker Activision Blizzard for $68.7 billion in cash - the biggest gaming industry deal in history.

New rules in the offing from China's cyberspace regulator will also require the nation's big internet companies to seek approval https://www.reuters.com/world/china/china-cyberspace-regulator-drafts-new-rules-internet-behemoths-sources-2022-01-19 for new investments and fundraising, sources have told Reuters. The regulator has denied issuing a document to that effect.

"In such a challenging regulatory and competitive environment, it is becoming more important for Tencent to strengthen the control of existing gaming-related portfolio companies such as DouYu," said the second person.

There have been some $13.7 billion in take-private deals for U.S.-listed Chinese companies over the past two years, compared to a combined $5.8 billion for 2018 and 2019, according to Refinitiv data.

Undervalued shares and increased scrutiny by U.S. regulators have often been cited as reasons for the deals. The average premiums paid by buyers jumped to 53% last year from 36% in 2020, the data showed.