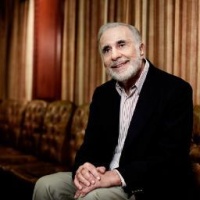 Activist investor Carl Icahn wrote a 850-word essay for The Economist entitled: 'an activist manifesto'. One word of advice Mr. Icahn gave: "At the risk of being a bit facetious, I would say: become a Twitter follower and read my future tweets!"

Icahn pointed to his August 2013 tweet that Apple (NASDAQ: AAPL) was “extremely undervalued." The stock is up 50% since then and Icahn argues it is still cheap.

For those not already following Mr. Icahn, his twitter handle is @Carl_C_Icahn.

Below is the entire essay:

In August 2013, I tweeted to my followers that we believed Apple was “extremely undervalued”.Since then Apple’s stock price has increased by over 50%. The Economist has asked me to write 850 words of advice on what the investor should do to profit in 2015. At the risk of being a bit facetious, I would say: become a Twitter follower and read my future tweets!

On a more serious note, in reply to The Economist’s question I believe that, even at today’s prices, Apple stock is greatly undervalued. Why? The answer is a pervasive misunderstanding among investors and Wall Street analysts: they think Apple is a hardware company when in reality it’s a company that sells an entire ecosystem of hardware, software and services. Once a consumer buys a single Apple device, thereby entering its ecosystem, they often increase their exposure to it through incremental Apple products. Then, when the time comes for them to replace their device, they tend to stay with Apple rather than switching to a competitor, which is the consumer behaviour suffered by simple hardware companies when what they sell is viewed as a commodity. We have written a letter to Tim Cook, the CEO, expressing our views (it can be seen on our website: shareholderssquaretable.com).

If you had purchased stock of IEP, our flagship company, at the start of 2000 you would have had an annualised return of 21.5% compared with the s&p500’s 3.8%; and if you had bought IEP on April 1st 2009 you would have had 33.8% compared with the s&p500’s 20.4% (counting in each case up until September 30th 2014). Even more telling is the return of a person who invested in 23 companies whose boards our appointees joined between January 1st 2009 and June 30th 2014; if the person invested in each company on the date that the nominee joined the board and sold on the date that the nominee left, they would have obtained an annualised return of 27%.

The benefits of an active lifestyle

The reason our record is so strong is that we are “activists” in the truest sense of the word. Over the past two decades we have got actively involved with CEOs and boards, often in a friendly fashion. I have had literally hundreds of dinners with ceos and board members, at my apartment in New York. Surprisingly I am still friendly with many of the CEOs, even the ones who left possibly as a result of my urging.

Our success proves that our activist views enhance value. We have proved this at companies such as Motorola, where we were a major force in promulgating the split of Motorola Solutions and Mobility, and then the sale of Mobility to Google. Without this, Motorola may well have gone bankrupt. We have recently been actively involved in Apple, Chesapeake, Forest Labs, Hain and eBay, to name a few. Even at Apple, where we are solidly behind management, few would deny we were instrumental in increasing the buyback.

Unfortunately, America’s corporate-governance system is dysfunctional. Many rules have evolved over the years to protect incumbent boards and managements from becoming accountable. Even for IEP it is very difficult to invade the fortress that protects even extremely poor incumbent managements. Recently, however, we have been able to get board representatives without having to start a proxy fight. As Sun Tzu’s “The Art of War” states, “The greatest victory is that which requires no battle”.

Perhaps more important, and more hopeful, a secular trend is starting. A number of large non-index pension funds now seem to be getting more interested in supporting me. These funds are under pressure to compete with the s&p index funds. Mutual funds and hedge funds charge higher fees than index funds that simply replicate the s&p500. To justify their fees they must perform better than the index funds. They concentrate on investments in certain stocks they believe are “undervalued”. In most cases the reason these stocks are “undervalued” is mismanagement or failure of the board or CEO to do certain things that would greatly enhance value. (A recent example of this was the announcement that PayPal will be spun off from eBay, something I have been urging for a year.)

Over the decades, our activism has enhanced shareholder value for all shareholders by multi-billions of dollars. But perhaps more importantly, it has made our companies more productive and competitive. While there are many good boards of directors, sadly there are not enough. If we do not act in the near term to make boards and CEOs more accountable to shareholders, the rightful owners of the companies they serve, then sadly America’s great economy will soon lose its pre-eminence.

I hope you will be following me on Twitter but if you invest, always remember there is a reason the word “risk” is in the risk/reward ratio that we study so assiduously at IEP.