Buffett Looks for Another 'Big Buy' in Mid-Cap Range; So Who's Next? 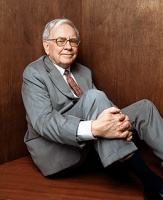 Warren Buffett spoke on CNBC Wednesday morning, saying in part that the global economy is slowing down, though the U.S. was doing better than Europe and Asia. He also noted that he was looking to make another big purchase and was recently approached by "about a $6 billion company." Buffett noted that he was already familiar with the company and planned to make more inquiries within days.

Here's a few ideas of what Buffett might be looking at based on today's action. Company values range from about $5.7 billion to $6.2 billion or so.

Celanese Corp. (NYSE: CE) might be a good target. The diversified chemical company has a light dividend and shares are well off annual highs above $52 hit last February.

Sterlite Industries (India) Ltd. (NYSE: SLT) is a copper miner which could benefit from continued global infrastructure expansion. It's not an American company, however, which may put it in the "maybe" category.

Another strong bet is Alleghany Corp. (NYSE: Y), which has a low P/E ratio at about 5.4 times. The fact that it's a P&C insurer might bolster Berkshire's GEICO unit.

Denbury Resources Inc. (NYSE: DNR) has a favorable valuation as well and could give Buffett further exposure to oil and gas exploration. Could get nicely with the recent BNSF acquisition. Shares are also relatively stable.

Of course, there are multiple others that Buffett might be mulling, but given his aim for value investing over the long-term, these might be some notable names to watch.