Year in Review: TAAT™ Provides Summary of its First Full Year, Including Progress on International Launches

LAS VEGAS and VANCOUVER, British Columbia, Jan. 04, 2022 (GLOBE NEWSWIRE) -- TAAT™ GLOBAL ALTERNATIVES INC. (CSE: TAAT) (OTCQX: TOBAF) (FRANKFURT: 2TP) (the “Company” or “TAAT™”) is pleased to recapitulate the milestones the Company reached in the calendar year of 2021, its first full year of operations after launching TAAT™ at retail for the first time in December 2020 in Ohio. As of January 2022 all three TAAT™ varieties are sold in well over 1,500 U.S. stores through a nationwide network of wholesalers in categories such as convenience and tobacco, in addition to several stores in Greater London in the United Kingdom. The Company has also significantly scaled its capacity for manufacturing the Beyond Tobacco™ base material of TAAT™, which it has configured in anticipation of new market launches to take place globally in 2022.

Noteworthy events for TAAT™ in each of 2021’s calendar months are summarized below under the respective headings for each month. Please note that as a summary, this is not a comprehensive listing of the Company’s material events during each stated period. Complete disclosures of material events can be found on the Company’s SEDAR profile.

January 2021: New distributors added as TAAT™ gains early-stage momentum among smokers aged 21+ in Ohio. TAAT™ Menthol becomes the first variety to be sold out and reordered, with an overall 60% of tobacco retailers who carried TAAT™ for three or more weeks having reordered as of late January 2021. TAAT™ also launched a statewide video advertisement campaign on 10,442 gas pump displays across Ohio.

February 2021: First mainstream media coverage of TAAT™ in a February 3, 2021 Forbes article profiling the Company. TAAT™ launches its e-commerce portal, making the product available to the majority of smokers aged 21+ in the United States. Upgrades to the Company’s manufacturing facility allow for enough Beyond Tobacco™ base material for over 57,000 TAAT™ cartons per month to be produced, in response to sustained demand in Ohio.

March 2021: Through a new campaign for the TryTAAT landing page, over 5,000 TAAT™ sample pack requests are made by smokers aged 21+ in all eligible U.S. states in a three-day period (March 24 through March 26, 2021, inclusive). TAAT™ is upgraded from the OTCQB® Venture Market to the OTCQX® Best Market in the United States, while sustaining its position on the Canadian Securities Exchange (“CSE”) Composite index as well as its CSE25™ subset of largest companies in Composite by market capitalization.

April 2021: First purchase order placed by an international wholesaler for approximately CAD $149,000, for distribution in the United Kingdom and Ireland. TAAT™ completes its first large-scale consumer research study with over 1,200 smokers aged 21+ in Ohio, Michigan, Illinois, and Pennsylvania, with 95% of those who “Definitely Would” or “Probably Would” purchase TAAT™ finding the concept of purchasing the product online to be “Extremely”, “Very”, or “Somewhat” appealing.

May 2021: After finalizing leases for new facilities in Las Vegas, Nevada, TAAT™ begins making arrangements to promptly migrate production to the new space, which is better suited to large-scale manufacturing. TAAT™ distributor in the United Kingdom confirms exemption from local “plain packaging” laws for cigarettes, representing a key competitive advantage for the Company against incumbent tobacco firms.

June 2021: TAAT™ sponsors the entourage of world champion boxer Floyd Mayweather in his June 6, 2021 fight, whose TAAT™ logo headwear appeared on pay-per-view and television broadcasts globally before, during, and after the match. A promotional video of Mr. Mayweather featuring TAAT™ posted to his Instagram profile garners more than four million views. A Georgia-based wholesaler with a 1,200-store network completely pre-sells its initial shipment of 15 TAAT™ master cases before it arrives. Fiscal Q2 2021 financial results show over 300% sequential revenue growth (please refer to the Company’s June 30, 2021 press release as well as its Fiscal Q2 2021 filing on SEDAR for more information). TAAT™ remains on the CSE Composite and CSE25™ indices following quarterly rebalancing.

July 2021: Complementing its existing presence in the north-central region of the United States, TAAT™ officially launches in Illinois where it enjoys the competitive advantage of a USD $4.59 MSRP; less than half of the state’s average tobacco cigarette pack price of USD $9.72. TAAT™ exhibits at its first business-to-business (“B2B”) trade show, where it is named “Best New Product” at the event.

August 2021: Contacts made at trade shows in July 2021 yield 68 closed initial purchase orders, reported in the first week of August 2021. Significant progress was made in Georgia and Michigan (over 70 stores within weeks of launching and a 147-store chainwide placement, respectively), marking seven states added in two months. Over CAD $1.6 million in purchase orders announced for international markets including Australia, as well as an additional order for the United Kingdom and Ireland.

Readers using news aggregation services may be unable to view the media above. Please access SEDAR or the Investor Relations section of the Company’s website for a version of this press release containing all published media.

September 2021: TAAT™ surpasses the 1,000-store mark in the United States. Advanced formulation of Beyond Tobacco™ using reconstituted material is acclaimed by tobacco wholesalers in Germany, Poland, France, and Switzerland. Over 43,000 TAAT™ packs arrive in London for distribution in the United Kingdom and Ireland. TAAT™ remains on the CSE Composite and CSE25™ indices following quarterly rebalancing.

October 2021: Follow-on private placement in TAAT™ for CAD $10 million is made by a group of venture investors led by Ms. Debbie Chang (co-founder of Horizons Ventures) in her personal capacity. TAAT™ adds 19 U.S. wholesalers in a 60-day period, gaining distribution in new states such as Virginia, Oregon, and Missouri.

December 2021: Through a national convenience distributor, TAAT™ is placed in 350 additional stores in the state of Virginia. Numerous TAAT™ placements in Greater London are confirmed. TAAT™ remains on the CSE Composite and CSE25™ indices following quarterly rebalancing.

TAAT™ Chief Executive Officer Setti Coscarella commented, “We are thrilled with the year we had in 2021 as we continued to form relationships with wholesalers both domestically and internationally, while establishing a presence at the same high-profile trade shows where major tobacco firms exhibit, and further optimizing our operations to facilitate long-term growth. During the calendar year 2021 TAAT™ also made several notable accomplishments in the capital markets, including our fifth consecutive quarter in the CSE Composite and CSE25™ indices and an upgrade to the OTCQX® Best Market in the United States. On behalf of the TAAT™ team, I express my utmost gratitude to everybody who contributed to our success over the past year as we continue to deliver an opportunity for smokers aged 21+ worldwide to make a nicotine-free choice.”

On December 13, 2021 the Company implemented a Restricted Share Units (“RSUs”) Plan (the “RSU Plan”), under which it has granted 2,000,000 RSUs to its Chief Executive Officer Setti Coscarella, further to an executive employment contract dated July 19, 2020.

On behalf of the Board of Directors of the Company,

THE CANADIAN SECURITIES EXCHANGE (“CSE”) HAS NOT REVIEWED AND DOES NOT ACCEPT RESPONSIBILITY FOR THE ACCURACY OR ADEQUACY OF THIS RELEASE, NOR HAS OR DOES THE CSE’S REGULATION SERVICES PROVIDER.

The Company has developed TAAT™, which is a tobacco-free and nicotine-free alternative to traditional cigarettes offered in "Original", "Smooth", and "Menthol" varieties. TAAT™'s base material is Beyond Tobacco™, a proprietary blend which undergoes a patent-pending refinement technique causing its scent and taste to resemble tobacco. Under executive leadership with "Big Tobacco" pedigree, TAAT™ was launched first in the United States in Q4 2020 as the Company seeks to position itself in the $814 billion1 global tobacco industry.

This news release may contain trademarked names of third-party entities (or their respective offerings with trademarked names) typically in reference to (i) relationships had by the Company with such third-party entities as referred to in this release and/or (ii) client/vendor/service provider parties whose relationship with the Company is/are referred to in this release. All rights to such trademarks are reserved by their respective owners or licensees.

Disclosures relating to investor relations firms retained by TAAT™ Global Alternatives Inc. can be found under the Company's profile on http://sedar.com. 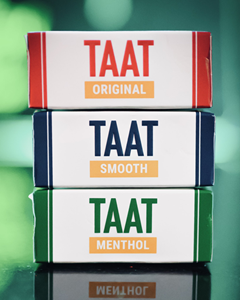 During its first full calendar year of operations in 2021, the Company launched TAAT™ all over the United States at retail as well as online through e-commerce, in addition to gaining store placements in the United Kingdom in Greater London. An advanced formulation of the Beyond Tobacco™ base material of TAAT™ has improved the product’s user experience, as well as several aspects of the manufacturing process at a larger scale.
Source: TAAT Global Alternatives Inc.