Report: Where Do Women Go to Law School in the U.S.?

TAMPA, Fl., March 01, 2021 (GLOBE NEWSWIRE) -- For the fifth year in a row, women made up the majority of law school students pursuing Juris Doctor (JD) degrees in the United States. Based on the most recent data (2020) from the American Bar Association, in 35 states and Puerto Rico, at least half of the students who are attending law school are women.

In its annual report, Enjuris compiled data from the ABA on law school enrollment to break down law school gender diversity by state and highlight the top-ranked schools for women.

In 1960, women comprised only 3.5 percent of enrollees in ABA-approved law schools. In 2016, the number of female law school enrollees surpassed male enrollees for the first time.

The top 20 ABA-accredited law schools by female enrollment in 2020 were:

In particular, women have been making steady gains in top-ranked law schools. Thirteen of the top 20 law schools as ranked by U.S. News & World Report had more female attendees than male attendees.

More infographics, charts and gender enrollment data can be found on Enjuris.com at: https://www.enjuris.com/students/law-school-women-enrollment-2020.html

About EnjurisEnjuris.com is dedicated to helping people who are dealing with life-altering accidents and injuries. They support students, families, caregivers, and communities with resources, personal stories, and a national directory of personal injury lawyers.

A photo accompanying this announcement is available at https://www.globenewswire.com/NewsRoom/AttachmentNg/5d1224c1-6ba0-4a0e-b33e-40025f225fa3 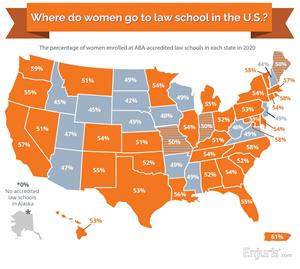