CALGARY, Alberta, Feb. 10, 2021 (GLOBE NEWSWIRE) -- (PIPE â TSX) Pipestone Energy Corp. (âPipestoneâ or the âCompanyâ) is pleased to provide an update on its production and operations, as well as report its year-end 2020 independent reserves evaluation prepared by McDaniel & Associates Consultants Ltd. (âMcDanielâ) with an effective date of December 31, 2020 (the âMcDaniel Reportâ).

Since inception, Pipestone has continued to demonstrate leadership in combining capital cost efficiencies with highly productive wells in the condensate-rich Alberta Montney play. This is reflected in the past yearâs significant growth in reserve volumes and continued reduction in future development costs (âFDCâ).

A photo accompanying this announcement is available at https://www.globenewswire.com/NewsRoom/AttachmentNg/350664c8-dd36-4ddb-872f-b102dbf587e1

During Q4 2020, production averaged 17,734 boe/d (31% condensate, 44% total liquids)(1), a quarterly record for Pipestone. During January 2021, production averaged approximately 20,211 boe/d (33% condensate, 46% total liquids)(1) based on field estimates as the six well 3-12 pad was gradually brought on production during the month. January 2021 is the first month Pipestone has exceeded the 20,000 boe/d milestone. In addition to the Lower Montney well previously mentioned at 3-12, the five new Montney B wells are producing at type curve expectations.

The wellsite facilities for the drilled and completed three well 8-15 pad is currently under construction with expected start-up prior to the end of February.

Pipestone continues to demonstrate cost reductions in its drilling and completions program. During Q4 2020, the Company completed six wells on its 3-12 pad for an average cost of $3.1 million (2,650 metre lateral length & 2.4 T/M proppant loading). Including the pad-site facilities, all-in DCE&T costs for this pad are $5.4 million per well.

Our most recent pad at 8-15 drilled in late 2020 had an average lateral length of 3,094 metres at a drilling cost of $2.2 million per well. The three wells were completed in January utilizing a proppant intensity of 2.5 T/M for a capital cost of $3.2 million per well. The 8-15 pad is a new pacesetter for Pipestone at a drilling cost of $378 per metre drilled ($711 per lateral meter), and a completion cost of $438 per tonne of proppant placed. Going forward, Pipestone expects to increase the average lateral length of its development wells to approximately 3,000 metres from a previous typical well length of approximately 2,500 metres.

Key Highlights from the Year-End 2020 McDaniel Report include:

McDaniel conducted an independent Reserves Evaluation effective December 31, 2020, which was prepared in accordance with definitions, standards, and procedures contained in the Canadian Oil and Gas Evaluation Handbook and NI 51-101. The Reserves Evaluation was based on a 3C forecast pricing and foreign exchange rates at January 1, 2021 as outlined in this press release.

Reserves included herein are stated on a company gross basis (working interest before deduction of royalties without the inclusion of any royalty interest) unless otherwise noted. In addition to the information disclosed in this news release, more detailed information will be included in Pipestone Energyâs annual information form for the year ended December 31, 2020, which will be available on the Companyâs website at www.pipestonecorp.com and on SEDAR at www.sedar.com on or before March 31, 2021.

(1)Â Flat Price Deck utilizes US$50 per barrel WTI, C$2.50 per GJ AECO, and $0.785 CADUSD exchange rate with no future inflation.Â (2)Â Hedges include commodity price hedges as at December 31, 2020.Â (3)Â Net debt represents bank debt and the addition of working capital and is a non-GAAP measure. See âAdvisoriesâ for further detailsÂ (4)Â Assumes full dilutive impact of all outstanding warrants, stock options, RSUs, and PSUs, as well as the estimated convertible preferred share balance as at December 31, 2020.

Pipestone Energy is an oil and gas exploration and production company focused on developing its large contiguous and condensate-rich Montney asset base in the Pipestone area near Grande Prairie. Pipestone is fully funded to grow its production from 15.6 Mboe/d in 2020 to 34 Mboe/d (midpoint) in 2022, while maintaining a conservative leverage profile. Beginning in 2022, the Company expects to generate annual free cash flow above growth and maintenance expenditures. Pipestone Energy is committed to building long term value for our shareholders while maintaining the highest possible environmental and operating standards, as well as being an active and contributing member to the communities in which it operates. Pipestone Energy shares trade under the symbol PIPE on the TSX. For more information, visit www.pipestonecorp.com.

Forward-looking statements are not promises of future outcomes. There is no assurance that the results or events indicated or suggested by the forward-looking statements, or the plans, intentions, expectations or beliefs contained therein or upon which they are based, are correct or will in fact occur or be realized (or if they do, what benefits Pipestone Energy may derive therefrom).

In particular, but without limiting the foregoing, this news release contains forward-looking statements pertaining to: additional wells planned for Pipestoneâs pad 14-4; completion date for gathering line to Veresen gas plant; on-stream date for pad 8-15; plans for the 2021 capital program; expectations around flow between operating facilities and a reduction of operating costs; an increase in lateral length of its development wells; reserves values and financial returns; FDC and F&D costs; forecasted pre-tax net asset value; expected production growth while maintaining a conservative leverage profile; and expectations to generate free cash flow above growth and maintenance expenditures.

Information and statements regarding Pipestone Energyâs reserves also are forward-looking statements, as they involve the implied assessment, based on certain estimates and assumptions, that the reserves exist in the quantities predicted or estimated and can be profitably produced in the future.

With respect to the forward-looking statements contained in this news release, Pipestone Energy has assessed material factors and made assumptions regarding, among other things: future commodity prices and currency exchange rates, including consistency of future oil, natural gas liquids (NGLs) and natural gas prices with current commodity price forecasts; the economic impacts of the COVID-19 pandemic; the ability to integrate Blackbirdâs and Pipestone Oilâs historical businesses and operations and realize financial, operational and other synergies from the combination transaction completed on January 4, 2019; Pipestone Energyâs continued ability to obtain qualified staff and equipment in a timely and cost-efficient manner; the predictability of future results based on past and current experience; the predictability and consistency of the legislative and regulatory regime governing royalties, taxes, environmental matters and oil and gas operations, both provincially and federally; Pipestone Energyâs ability to successfully market its production of oil, NGLs and natural gas; the timing and success of drilling and completion activities (and the extent to which the results thereof meet expectations); Pipestone Energyâs future production levels and amount of future capital investment, and their consistency with Pipestone Energyâs current development plans and budget; future capital expenditure requirements and the sufficiency thereof to achieve Pipestone Energyâs objectives; the successful application of drilling and completion technology and processes; the applicability of new technologies for recovery and production of Pipestone Energyâs reserves and other resources, and their ability to improve capital and operational efficiencies in the future; the recoverability of Pipestone Energy's reserves and other resources; Pipestone Energyâs ability to economically produce oil and gas from its properties and the timing and cost to do so; the performance of both new and existing wells; future cash flows from production; future sources of funding for Pipestone Energyâs capital program, and its ability to obtain external financing when required and on acceptable terms; future debt levels; geological and engineering estimates in respect of Pipestone Energyâs reserves and other resources; the accuracy of geological and geophysical data and the interpretation thereof; the geography of the areas in which Pipestone Energy conducts exploration and development activities; the timely receipt of required regulatory approvals; the access, economic, regulatory and physical limitations to which Pipestone Energy may be subject from time to time; and the impact of industry competition.

The forward-looking statements contained herein reflect management's current views, but the assessments and assumptions upon which they are based may prove to be incorrect. Although Pipestone Energy believes that its underlying assessments and assumptions are reasonable based on currently available information, undue reliance should not be placed on forward-looking statements, which are inherently uncertain, depend upon the accuracy of such assessments and assumptions, and are subject to known and unknown risks, uncertainties and other factors, both general and specific, many of which are beyond Pipestone Energyâs control, that may cause actual results or events to differ materially from those indicated or suggested in the forward-looking statements. Such risks and uncertainties include, but are not limited to, volatility in market prices and demand for oil, NGLs and natural gas and hedging activities related thereto; the ability to successfully integrate Blackbirdâs and Pipestone Oilâs historical businesses and operations; general economic, business and industry conditions; variance of Pipestone Energyâs actual capital costs, operating costs and economic returns from those anticipated; the ability to find, develop or acquire additional reserves and the availability of the capital or financing necessary to do so on satisfactory terms; and risks related to the exploration, development and production of oil and natural gas reserves and resources. Additional risks, uncertainties and other factors are discussed in the MD&A dated November 11, 2020 and in Pipestone Energyâs annual information form dated March 17, 2020, copies of which are available electronically on Pipestone Energyâs SEDAR at www.sedar.com.

This news release contains references to ânet debtâ, âoperating netbackâ, and âfree cash flowâ which are terms commonly used in the oil and natural gas industry but without any standardized meaning or method of calculation prescribed by International Financial Reporting Standards (âIFRSâ) or applicable law. Accordingly, Pipestone Energyâs determination of these metrics may not be comparable to similar measures presented by other issuers.

âNet debtâ is a non-GAAP measure that is calculated as long-term debt plus adjusted working capital deficit. Adjusted working capital is comprised of current assets less current liabilities on the Companyâs consolidated statement of financial position and excludes the current portion of financial derivative instruments and the current portion of lease liabilities.

âOperating netbackâ is a non-GAAP measure that is calculated on a per-unit-of-production basis and is determined by deducting royalties, operating and transportation expenses from liquids and natural gas sales, after adjusting for realized commodity financial derivative instrument gains or losses.

Operating netback is a common metric used in the oil and natural gas industry and is used by Company management to measure operating results on a per boe basis to better analyze and compare performance against prior periods, as well as formulate comparisons against peers.

This presentation contains certain other oil and gas metrics, including DCE&T (drilling, completion, equip and tie-in costs), recycle ratio, F&D and net asset value (or NAVPS), which do not have standardized meanings or standard methods of calculation and therefore such measures may not be comparable to similar measures used by other companies and should not be used to make comparisons. Such metrics have been included herein to provide readers with additional measures to evaluate the Company's performance; however, such measures are not reliable indicators of the future performance and future performance may not compare to the performance in previous periods and therefore such metrics should not be unduly relied upon. DCE&T includes all capital spent to drill, complete, equip and tie-in a well. Recycle ratio means operating netback divided by F&D costs for the particular reserves category. The calculation of F&D costs includes all exploration and development capital for the year plus the change in future development capital for the year. This total capital including the change in the future development capital is divided by the change in reserves for the year. Net asset value has been calculated based on the estimated net present value of all future net revenue from our reserves, before income taxes, as estimated by McDaniel effective December 31, 2020, see âPre-Tax Net Asset Valueâ for more information.

References herein to âCGRâ mean condensate/gas ratio and is expressed as a volume of condensate and NGLs (expressed in barrels) per million cubic feet (mmcf) of natural gas.

Disclosure of production on a per boe basis in this press release consists of the constituent product types and their respective quantities as disclosed in the following table: 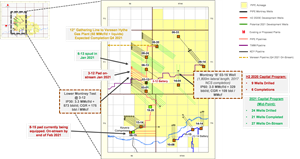