SUDBURY, Ontario, May 12, 2021 (GLOBE NEWSWIRE) -- Manitou Gold Inc. (TSX-V: MTU) (the âCompanyâ or âManitouâ) is pleased to announce that it is increasing its drill program along the mine-hosting Baltimore Deformation Zone (the âBDZâ) to a total of 30,000 metres. Following the successful closing of the Companyâs $5 million financing, the Company is now accelerating its aggressive exploration on its 100% owned Goudreau Project, which is located along the BDZ, in Northeastern Ontario. The drill program is anticipated to provide for continuous drill results through the first quarter of 2022.

Highlights of the 2021 exploration to date include:

âI am pleased to announce another significant increase in our exploration program to test the crustal-scale Baltimore deformation zone. The BDZ, represents the fault-offset extension of the Goudreau-Localsh deformation zone that hosts two multi-million ounce gold deposits, being Alamos Goldâs Island Gold Mine and Argonautâs Magino project,â stated Richard Murphy, President and CEO of Manitou Gold. âThe expansion to the ongoing drill program will allow us to continue to unlock the exploration potential along the western 10 kilometres of the BDZ.â

New Geophysical Surveys Covering Western 10 km of the BDZGround geophysical surveys, including an Alpha IP survey covering an additional 10 kilometres of strike length along the BDZ, are well underway.

High priority regional targets along major structural intersections and flexures along the BDZ are also currently being prioritized, with initial results expected during the second half of May. Initial drill targets are expected to be ready for testing in June.

About the Goudreau Project

The Goudreau Project is located 50 kilometres northeast of Wawa, Ontario and is underlain by Archean-aged rocks of the Michipicoten Greenstone belt. The project area is traversed by several broad-scale deformation corridors (such as the BDZ), which host the majority of the important regional gold deposits and showings in the region.

The eastern half of Manitouâs Goudreau Project is centrally located over the BDZ, encompassing an 18 kilometre of strike length of the BDZ. Geological and geophysical interpretation indicate that the BDZ is the fault offset continuation of the Goudreau-Localsh Deformation Zone (the âGLDZâ), which hosts Alamos Goldâs (TSX:AGI; NYSE:AGI) Island gold deposit and Argonaut Goldâs (TSX: AR) Magino deposit, in addition to a number of smaller-scale past producing mines, including the past-producing Cline and Edwards mines.

As a fault offset extension of the GLDZ, which hosts two multi-million ounce gold deposits and has seen over 1,000,000 metres of drilling for gold, the BDZ has been extremely under-explored along its 17 kilometre long trend, with only 4400 metres of historic gold drilling.

A photo accompanying this announcement is available at https://www.globenewswire.com/NewsRoom/AttachmentNg/72f99853-b1b6-4e8d-98da-4cf80cd857e8 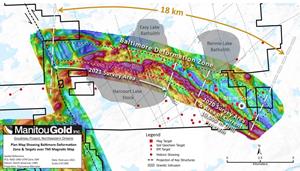