At the Endeavour prospect 5 holes for 192 metres were drilled to test the extension of the mineralisation to the west. Significant mineralisation includes:

On M37/632 12 holes for 726 metres were drilled to test an anomalous structure identified from a drone magnetic survey. Sample assay results from this drilling has yielded one encouraging result which was in hole 21SDRC12 and intersected 4 metres at 0.45 g/t Au from 24 to 28 metres down hole.

Drone Magnetic SurveyA drone magnetic survey was flown over 4 blocks over the South Darlot licenses on 20m flight lines and a 20m flying height for all blocks with a section over the Endeavour mineralisation flown with a 10m line spacing. The information collected from this survey was used in collaboration with an earlier 1999 survey and a drill target on M37/632 was generated. Analysis and interpretation of the data is ongoing and additional drill targets focussing on structural breaks in the geology will be made.

Trial DGPR SurveyA trial Deep Ground Penetrating Radar (DGPR) survey was conducted by Ultramag Geophysics over the Endeavour and Mermaid prospects with a series of seven lines surveyed on an approximate twenty-meter line spacing. Analysis and interpretation of the data is in progress.

CIO maintains it is entitled to an interest of at least 70%. This is disputed by Red 5 Limited.

Red 5 Limited and CIO are in advanced negotiations to resolve this matter, which resolution will only be binding upon the execution of a definitive binding agreement. We anticipate that the matter will be resolved in the near term.

The registration of unencumbered title of that 51% interest is being delayed by Silverstream SE22, who provided funding to BK Gold Mines Pty Limited to fund their acquisition under the Tenement Acquisition Agreement. Silverstream SE22 has refused to remove the caveats which prevents registration of the transfers. CIO maintains that such refusal has no legal foundation and is evaluating its options which includes commencing legal proceedings.

The tenements set out in the table below (âRed 5 JV Tenementsâ) are the subject of a joint venture between the Company and subsidiaries of Red 5 Limited (âRed 5 JVâ) and are situated southwest of Red 5âs Darlot gold mine and are contiguous with CIOâs current holdings in the area. The Red 5 JV Tenements are detailed below.

The four shallow holes intersected a narrow 1 to 2 m wide quartz vein but failed to record any significant mineralsiation and it must now be concluded there is a depletion zone in the highly weathered upper horizon of this mineralised system.

The fifth hole 21ENRC-03 targeted the quartz lode west of the known position of the lode and intersected 2 m @ 9.7 g/t Au from 50 metres down hole (true width of 1.6 metres). Figure 2 to 4 shows a plan, cross section and long section of the Endeavour lode and the spatial relationship of the intercept relative to historical drilling.

Table 2: List of holes drilled in July 2021 at the South Darlot Project

A structural target generated from the recent drone magnetics survey was drilled in July 2021. A total of 12 reverse circulation drill holes were drilled on three lines spaced 80 metres apart. A total of twelve holes were drilled for 726 metres. Sample assay results from this drilling has only yielded one modestly interesting result which was in hole 21SDRC12 and intersected 4 metres at 0.45 g/t Au from 24 to 28 metres down hole (Table 2). This was a 4 metre composited sample, and the individual one metre samples will be submitted for fire assay analysis.

A low level, high-resolution rotary wing, drone-based magnetic survey of the South Darlot licenses on 20m flight lines and a 10m flying height covering an area of 6.6 km2 was flown over four areas in May 2021 by Ultramag Geophysics. The objective of the survey was to ascertain if geological breaks in stratigraphy representing structural discontinuities could be identified with the close spaced, high resolution data. Preliminary work has identified one such structure which was drill tested in July 2021. Further analysis of this data set will be undertaken to determine its usefulness for drill targeting.

A trial Deep Ground Penetrating Radar (DGPR) survey was conducted by Ultramag Geophysics over the Endeavour and Mermaid prospects with a series of seven lines surveyed on an approximate twenty-meter line spacing. The specifications of the survey are as follows: 20 kW, 3 Âµs pulse width, 15,000 Hz with a 1 second sample which is equivalent to 1 meter shot spacing.

Mr Andrew Bewsher who is a Member of the Australian Institute of Geoscientists and has compiled the information within this report relating to mineralisation and drill results. Mr Bewsher has sufficient experience relevant to the style of mineralisation and type of deposit under consideration and to the activity currently being undertaken to qualify as a Competent Person as defined in NI 43-101.

On behalf of the Board of DirectorsCENTRAL IRON ORE LTD.

THIS NEWS RELEASE IS NOT FOR DISTRIBUTION TO UNITED STATES SERVICES OR FOR DISSEMINATION IN THE UNITED STATES.

Cautionary Note Regarding Forward-Looking StatementsThis news release contains forward-looking information within the meaning of Canadian securities laws. Although the Company believes that such information is reasonable, it can give no assurance that such expectations will prove to be correct. Forward-looking information is typically identified by words such as: believe, expect, anticipate, intend, estimate, postulate and similar expressions, or are those, which, by their nature, refer to future events. The Company cautions investors that any forward-looking information provided by the Company is not a guarantee of future results or performance, and that actual results may differ materially from those in forward looking information as a result of various factors, including, but not limited to, the state of the financial markets for the Companyâs equity securities, the state of the market for iron ore or other minerals that may be produced generally, recent market volatility; variations in the nature, quality and quantity of any mineral deposits that may be located, the Company's ability to obtain any necessary permits, consents or authorizations required for its activities, to raise the necessary capital or to be fully able to implement its business strategies and other risks associated with the exploration and development of mineral properties. The reader is referred to the Company's disclosure documents for a more complete discussion of such risk factors and their potential effects, copies of which may be accessed through the Companyâs page on SEDAR at www.sedar.com. 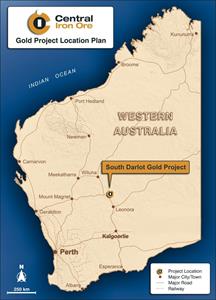 Locality map of the South Darlot project
Figure 1b 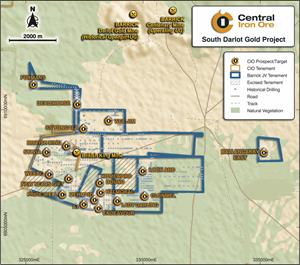 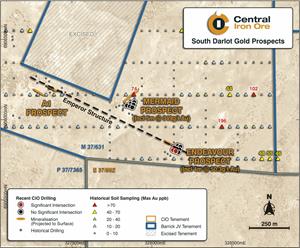 Plan of the Endeavour prospect on the Emperor Fault
Figure 3 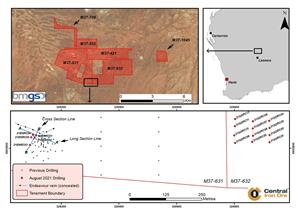 Plan of tenements and collar locations of recent drilling
Figure 4 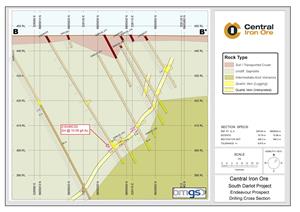 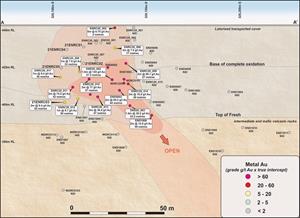 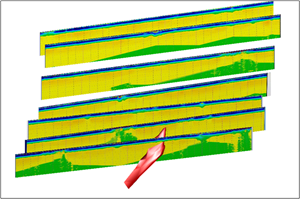