CGTN: Beyond the Mountains: Life in Xinjiang

FOR IMMEDIATE RELEASE. (This material is distributed by MediaLinks TV, LLC on behalf of CCTV. Additional information is available at the Department of Justice, Washington, D.C.)

WASHINGTON, April 16, 2021 (GLOBE NEWSWIRE) -- CGTN releases "Beyond the Mountains: Life in Xinjiang" an 80-minute film on the contemporary state of northwest China's Xinjiang Uygur Autonomous Region. Featuring 24 individuals living on the north and south of the Tianshan Mountains amid vibrant socioeconomic changes, it aims to break stereotypes and clear up misconceptions from both inside and outside the region through four parts: Changing Times, Following the Money, New Generations, and Man and Nature.

Tianshan Mountains, stretching for thousands of miles across China's northwestern frontier, divides the Xinjiang Uygur Autonomous Region in half â the relatively affluent north and the less developed south. For some time, people in the south with a bigger ethnic minority population didn't understand the rapid development in the north while those in the north lacked accurate views of the south, let alone people from outside the region.

After decades of development and interaction, people from both sides of the mountains became acquainted with each other. Mountains are physical boundaries that can be crossed, but "a dose of prejudice comes from the mountains in our mind that prevent us from seeing the truth," according to Han Bin, director of the documentary "Beyond the Mountains: Life in Xinjiang."

(Film by Han Bin and his production team; text by Wang Xiaonan)

Click here for more about all âBeyond the Mountainsâ and to view it in its entirety:https://news.cgtn.com/news/2021-04-16/Beyond-the-Mountains-Life-in-Xinjiang--Zui80BwyOc/index.html 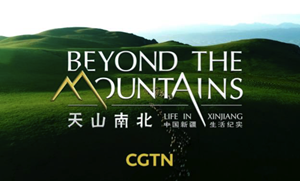